Nomas Foundation presents Hiaitsiihi, a solo show by Julien Bismuth. The artist accompanied the anthropologist Marco Antonio Gonçalves for two stays with the Hiaitsiihi people in 2016 and 2017 in their land, on the banks of the Maici river in the Amazon rainforest in Brazil. Named Pirahã by their neighbors, this semi-nomadic group calls itself the Hiaitsiihi, meaning a body (ibiisi) living in a layered cosmos. Hunter-gathers who continue to fish and hunt with bows and arrows, the Pirahã have been living in symbiosis with the Amazon rainforest for centuries. They live for most of the year without shelter from the elements and rely only on the most essential material objects for their subsistence. What we would call their culture consists primarily of the songs they sing and stories they tell in their singular tonal language, which can be whistled, spoken, or hummed. Their complex cosmology is incarnated in the stories, songs, and rituals which punctuate and accompany their daily activities. They have no political structures, no economic or societal inequalities, and no obligations other than those of survival. 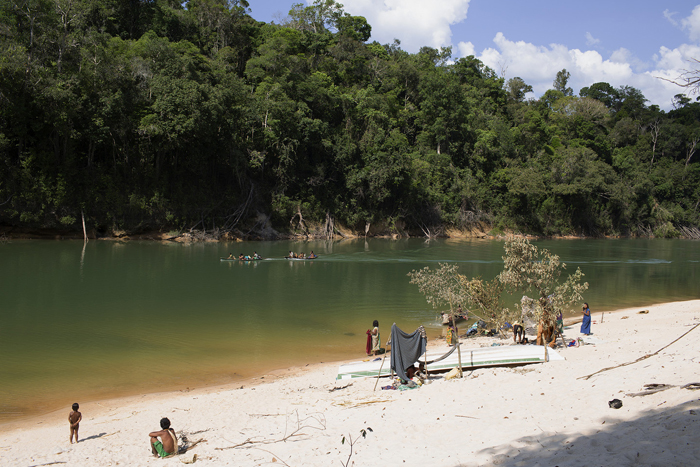 Working primarily within the mediums of photography and video, Bismuth interventions are marked by a similar discretion of means. The footage is shown without narration or explanation, and with minimal editing. Excerpts from interviews with Marco Antonio Gonçalves are shown separately, alongside photographs and texts by the artist. The interviews and texts engage with the ethical, political, and cultural questions raised by their encounters with the Pirahã, working to address them in all their complexity. How does one communicate across a cultural divide so as to maintain and safeguard it? How have the Pirahã been able to preserve their way of life in the face of increasing attacks on indigenous lands and the Amazon rainforest? What can we learn from them, and how can we work to defend their culture and way of life, as well as the environment on which they rely for their survival?

These questions have only become more urgent and vital in the latest months, in light of the disastrous policies of the Bolsonaro government. As the recent spate of fires has shown, the consequences of deforestation are not just a threat to the survival of the Pirahã and other indigenous groups; we are all equally endangered by the destruction of the Amazon rainforest. Frenetic deforestation inching towards a point of no-return, carbon-dioxide levels rising rapidly to unsustainable levels, increasingly harsh droughts, and loss of biodiversity are just some of the effects of Bolsonaro’s governance. As a counterpoint, the Pirahã way of life reveals an alternate mode of existence and interaction with the complex and unique ecosystem of the Amazon rainforest, one built on the enjoyment and preservation of its resources, rather than on their consumption and depletion.

How then to defend the Hiaitsiihi’s rights to their material and immaterial otherness? Counter-hegemonic forms of governance like those of the Pirahã are needed to ensure indigenous people the rights to their culture, their land, and their way of life. They are also emerging as an increasingly vital alternative to our forms of governance. As in Plato’s Letter VII, a shift has to be made to a politics in defense of life rather than one steered by the insatiable demands of profit. As such, the Pirahã and their way of life are anything but a relic of a so-called "primitive" past. Rather, they stand as an illuminating example for the present and future of our world.

Julien Bismuth (b. 1973 Paris, France) lives and works in New York. Working in the mediums of collage, installation, and performance, Bismuth straddles a wide range of critical and cultural interrogations. His often practice intertwines language and image to call both into question, probing the ways in which our representations of the world shape and inform our decisions and interactions.

Hiaitsiihi is curated by Raffaella Frascarelli, in collaboration with the Research Unit Aesthetic in the Social, Department of Social and Economic Sciences, Sapienza University of Rome.