Busan Biennale 2022 will be opening on September 3 and continuing until November 6. With the theme of We, on the Rising Wave and planning by artistic director Haeju Kim, this event will feature a total of 239 works by 64 artists/artist teams (80 people in all) representing 25 countries.

The “wave”concept encompasses the ideas of people in motion, the churning tides of history, radio waves and wavelengths, the earth and sea, and interconnectedness. The idea of being “n the rising wave”conveys the sense of individual bodies situated in a wavelike historical and environmental context, where human beings and the other living things and objects on our planet are closely interwoven into one global body.

Once a small fishing community, the Korean city of Busan has developed over time into the major metropolis it is today, starting with the reclamation of the sea to form a land-based port and continuing through periods of rapid population influx and accelerated industrialization. Its landscape of complex structures— mixture of ports and industrial facilities, the vertical lines of high-rise buildings, elevated highways and bridges, all on a natural terrain of mountains, ocean, and rivers—xemplifies the dynamic changes that Asian cities have undergone since the modern era. Busan Biennale 2022 presents the stories that lie hidden beneath Busan’ scenery, connecting them to other stories from more distant places as it examines Busan’ situation in the context of our global reality.

The exhibition centers on four main themes. First, it focuses on the identity of Busan in terms of “igration.”Inspired by the fact that most of the city’ population came from other regions as it underwent rapid expansion from the original opening of the port in 1876 through the Korean War from 1950 and 1953 and the subsequent industrialization era, it draws connections between this identity and other histories of migration and the stories related to them. A second theme concerns the stories of women and female workers, who have been historically overshadowed despite their contributions to Busan’ industrialization process. The third theme starts from issues that relate to Busan’ urban ecosystem, which emerged amid a process of rapid growth and changes over a diverse natural landscape of mountains, rivers, and the sea. Reflecting on the environmental devastation around the world today and the ways in which lives have been impacted by it, the exhibition raises issues of coexistence between nature and humanity in the situation we now find ourselves facing. Finally, the exhibition reflects in a historical sense on the effects that technology and modernization have had on the shape the city has taken, while imagining how the changing technology of the future might relate to the region’ locality. As it explores these four pathways, Busan Biennale 2022 considers the shape, state, and time in which our current “ave”is situated—nd asks the question of what step we should take next.

In addition to the exhibition, Busan Biennale 2022 will also feature a wide range of public programs, such as performances, artist talks and lectures, and workshops. Artist talks and lectures will be taking place from Saturday, September 3 until late October, offering an opportunity to hear from the participating artists about all their work, including the research, creation, and exhibition processes. A workshop has also been organized with Sandy Rodriguez, Sera Waters, and Ha Mihyun. At the exhibition venue on Yeongdo Island, an outdoor theater will be screening documentaries and videos of the participating artists around sundown every Thursday to Sunday. The first feature screened will be Still and All by Busan-based documentary director Kim Young-jo. October will see the Asian premiere of Remote, a film by Mika Rottenberg and Mahyad Tousi. 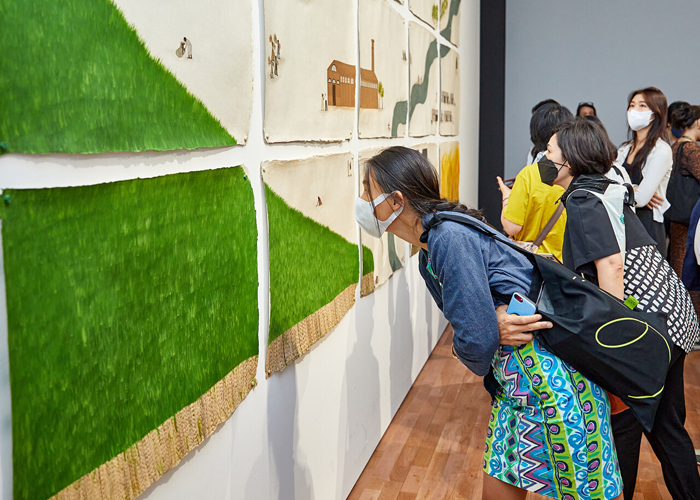