Museo Amparo presents a major exhibition dedicated to Sheila Hicks; the first in Mexico after her collaboration with Antonio Souza Gallery in 1962.

Sheila Hicks - Free Threads, Textile and its Pre-Columbian Roots, 1954-2017 offers a new and original interpretation of her work, allowing to appreciate a large number of works that have not been exposed for several decades, including some made in Mexico in the 1960s.

With approximately 120 pieces made at different times, as well as numerous photographs and archival documents, the exhibition will provide a broad overview of her artistic work, allowing to highlight their Latin American roots and influences.

A student of Josef Albers at Yale University, Sheila Hicks received a solid pictorial training, a medium in which she made her first works - two oil paintings from 1954 and 1957, never exhibited before, are to be displayed in this exhibition. It was during that period that she developed a sensitivity marked by the power and effects of color.

Her work underwent a radical change in 1957 when she began a series of trips through Chile and the region, during which she became acquainted with Pre-Columbian textiles and ancient Andean weaving techniques. Through this approach, the exhibition aims to confront Sheila Hicks’ art with 20 Pre-Columbian textiles from the collections of the Museo de Arte de Lima.

This exhibition proposes a new reading, emphasizing that the achievements of her training in the field of abstract painting did not disappear when her work turned to textiles, which led the artist to address pictorial abstraction in a unique way, which manifested itself very quickly through an openness to spatial concerns.

In addition to these pictorial and structural considerations, the importance of architecture and decoration in the art of Sheila Hicks are explored, as well as color considered as form and texture, and language issues.

A gallery dedicated to the Andean and Mexican contexts will include Hicks’ travel documents on Latin America, her thesis on Pre-Columbian textiles, presented at Yale University in 1957, and records of her years in Mexico as a witness and participant in the creative turmoil of the time, during which she met important figures like Felix Candela, Luis Barragán and Mathias Goertiz. 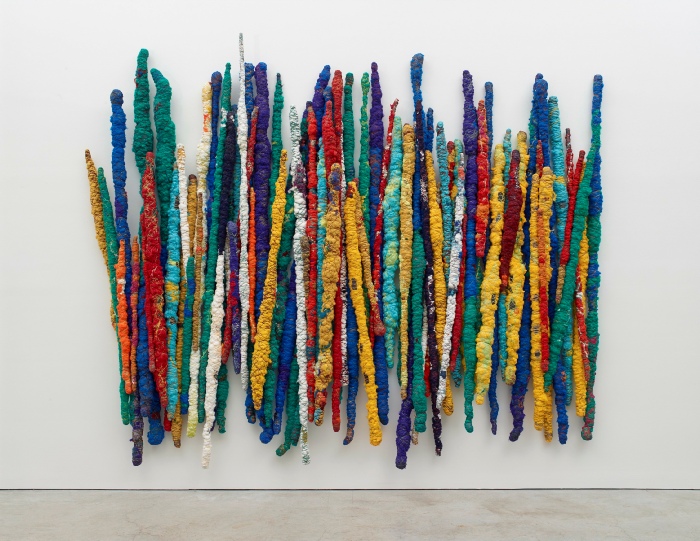