It’s not really a dream. Perhaps it is rather a matter of science fiction, allowing for different periods and forms of colonialism to merge and appear, simultaneously, before us.

Inter-territorial fluxes, and the powers that recall them; biogenetic transmutations; resource extraction and the spread of agro-toxins; multinational capitalism subsuming the present under the laws of production. All of these define, against all other narratives, the control over life and death exercised by the colonial violence of capital. This is the colonisation of the present as the pure science fiction of the coloniser.

Pedro Neves Marques, Learning to live with the enemy

In opposition to this, the world is here considered as a system of social relations and contiguities between humans and non-humans, which splinters the quintessentially modern—and colonial—idea of Nature into a multinaturalism that is politically negotiated at each move.

In short videos, film-essays and fictions, sculptures, installation and video-infographics, different cosmologies and anthropological narratives are summoned and pitted against the homogenising centrality of the modern colonial program. Each situation offers a different form of addressing the irreducibility among the agents of these relations. Whether we’re dealing with the paradoxical, sexualized evolution from modern botany to current genetically-modified sterile seeds, with their different forms of representation and indexation of organic life; the emergence and quarantine of the post-natural mosquito that carries the Zika virus—seen copulating under a chemical cloud; the relation between a robotic hand which mimics basic human anatomy and a mimosa pudica, a South American plant that has become an invasive species on other continents; or the dystopian architecture of petrochemical ocean metropolises, separating themselves from national jurisdictions and planning for the future of an industry bound for extinction. In all these instances, the emergence of irreducible difference provokes a dis-identification with the colonising process, but also with the idea of a shared world, common to all.

The sequence of ruptures between different worlds offered by these works culminates with the special significance of new biotechnological and computational agents. With regard to these, we remain infinitely alien, for we do not determine the place of enunciation concerning what it means to live with the enemy. Here, we remain unable to listen and understand a dialogue between an Amerindian android and transgenic corn—after all, to whom does humanity belong? There exists no dream or fiction capable of fully incorporating the coexistence of these different cosmologies—modern, animist, or technophilic—only the perception that they all simultaneously and ceaselessly take place in a ruptured world and that the position of enemy, more than nature or culture, draws its frontiers. 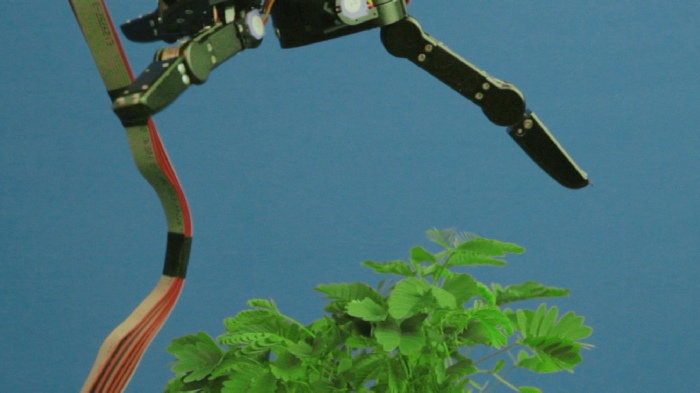 Pedro Neves Marques, The Pudic Relation Between Machine and Plant, 2016. With the kind support of King's College Centre for Robotics Research.