Olympia (the real-time disintegration of the Berlin Olympic stadium into ruins over the course of a thousand years), started March 15, 2016.

Olympia is a computer-generated replica of the Olympic Stadium in Berlin, which finds itself in a time-space devoid of human intervention and entrusted to the cycles of nature. Following the original building theory, in which the stadium’s own decay has been pre-incorporated, Olympia invokes a precise cycle of creation to dissolution to rebuilding. Although the human element has been removed, it is introduced through the work’s synchronicity with our own life cycle.

The waiting inherent to Olympia is overly-stretched for any one beholder. To live with the piece is an experience marked by the meditative effect of seeing actual time pass in an environment that is both real and unreal, while being forced to experience personal duration in relationship to a much larger volume of time.

The software used is based on a so-called game-engine, or serious game. Olympia shares the same tools of many first-person shooting games, but is conceptually far more complex. Lacking the possibility of human intervention or live action, only elements of weather and time have an impact on the building, in which each stone is in its exact original place thanks to the unique photographic scanning technique that was used.

From season to season, we can observe the growth of weeds “irrigated” by the computer program that calculates the exact precipitation, weather and seasonal conditions in Berlin. Trees and vegetation will gradually occupy more of the view towards the stadium until eclipsing it completely. Since March 15, 2016, building details and vegetation have changed considerably, as illustrated by the hundreds of stills that have been captured since the program went live. 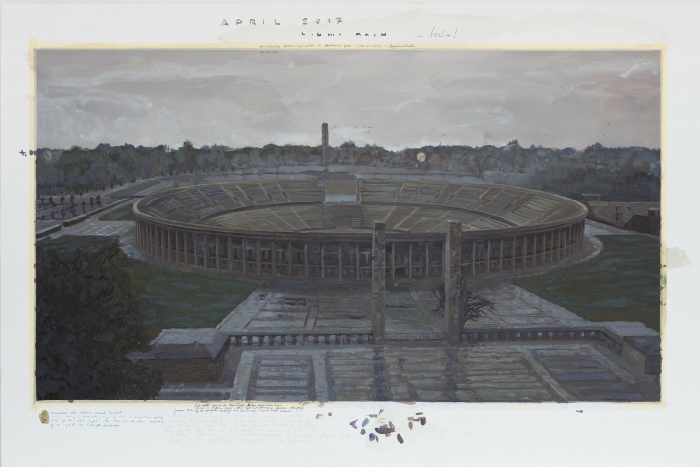