Orla Barry and Els Dietvorst centre their work around human interaction and the relationship between mankind and nature. The oeuvres of both artists are strongly related to their reflections on society and are based on a sustainable and respectful approach to the natural world: art and life are one in their practices.

The exhibition Wintrum Frod is the first project in which Orla Barry and Els Dietvorst unite the works that grew out of their work on the farm. The title is Anglo-Saxon for "wise in winters" and refers to the knowledge gained through extremely cold seasons. All the works in the exhibition are closely connected to their surroundings in Ireland. At the same time, the project can be seen in a wider context as a reflection on hyper-consumerism within our society. The sheep farm operates in the market economy, after all, and follows the logic that goes hand in hand with this game. The evolution in food production is just one consequence of capitalist thinking that influences a more general vision of society. Because we want cheap food, companies drive through economies of scale in order to work more efficiently, and the individual is excluded from the process. Knowledge passed down and accumulated by producers through their years of personal involvement is being downplayed and set aside. The relationship between consumers and food is also fading and leading to a growing gulf between human beings and the natural world. In response to these evolutions, Orla Barry and Els Dietvorst go in search of disappearing skills, for example in pedigree sheep breeding or fishing traditions, and bring these different narratives and their underlying symbolism together in individual works.

“Hyper-consumerism is the dominant matriarch of this destructive herd and the dysfunctional economic model that supports it, generating waste and ecological damage on a massive scale.” (John Vidal, "The seven deadly things we’re doing to trash the planet," The Guardian, 16/12/2016.) 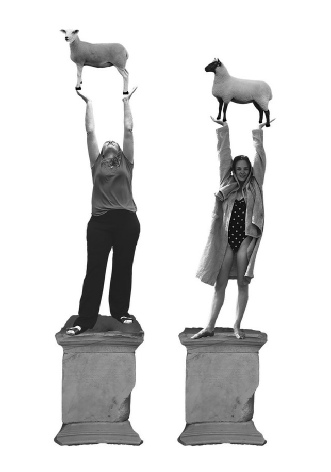 Mu.ZEE has invited them to stage a joint exhibition at two locations: the Permekemuseum in rural Jabbeke and Mu.ZEE in the city of Ostend. The Permekemuseum is housed in the former home of Constant Permeke, a painter with a profound admiration for farming and fishing who decided to build his own house amid this green landscape. These surroundings have now been swallowed by villas and crisscrossed by busy roads, with petrol stations and shops. The contrasts between nature and urbanity and between past and present are inextricably linked to this location and form an ideal context for Orla Barry’s and Els Dietvorst’s exhibition due to the intrinsic connections with their work.

From 2011 until 2018, Orla Barry and Els Dietvorst ran a sheep farm in Ireland. The organisational and physical responsibilities that this entailed influenced them both as human beings and as artists. ‘Learning by doing’ has always been a core part of their artistic practice. By working together and analysing the environment, but chiefly by engaging in the physicality of the work themselves, they accumulate knowledge that they subsequently process and share in their oeuvres. Today Orla Barry continues to manage the pedigree Lleyn flock on her father’s farm. In her individual practice, Els Dietvorst completes the circle with this exhibition and ends in Mu.ZEE with an artistic response to all the experiences she has gained during these seven years.