The Austrian Cultural Forum New York is pleased to present a new installation by Austrian-born, New York-based artist Martin Roth, titled In May 2017 I cultivated a piece of land in Midtown Manhattan nurtured by tweets.

In his latest installation for the Austrian Cultural Forum New York, Martin Roth has created a retreat. Viewers, upon descending to the subterranean gallery, emerge into a simulated forest clearing. Trees, depicted on wallpaper, cover the walls. In the middle of the space, seven tons of soil and sand support over 200 lavender plants growing under fluorescent light. This uncanny sanctuary at the ACFNY in Midtown Manhattan is facilitated by the most unlikely of sources: tweets.

Roth has created a system by which the strength of the grow lights above the rows of lavender plants increases in direct relationship to the tweets of powerful public opinion shapers: as these statements are retweeted with greater frequency, the lights get stronger. Through this system, the lavender plants become a kind of a perverse index of the politico-cultural climate, metamorphosing these conditions by their thriving.

The pace and tenor of the current political discourse, blasted out through social media 24/7 without respite, affects our psyche in a profound way. The lavender plant is known for its calming properties, and it is commonly used to treat sleep disorders and depression. The plant's restorative effect in Roth's installation at the ACFNY offers a reprieve against the heightened anxiety of our current moment. As controversy builds, the scent of lavender becomes stronger. What this amounts to is a kind of lush bunker; Roth's refuge at once affords the viewer escape from the world and reminds them of its instability.

By spatializing the data generated by the Twitter accounts, Roth’s eerie simulation makes explicit the convergence of the psychical structures that undergird our politics and the felt life of the American every day. Today’s media culture has surpassed the time of response; indeed, it has transcended even the time of media. We exist in one interminable present wherein the actions of a few agents have immediate, pervasive, and grave consequence. Like many of Roth's previous works, In May 2017 I cultivated a piece of land in Midtown Manhattan nurtured by tweets is a kind of processual refuge whereby the slow temporality of plant life allows for a site of contemplative calm. The viewer’s sense of smell is the primary means of apprehending Roth’s installation; the work enters the viewer, alerting the body politic to an insidious undercurrent of anxiety. Roth lives and works in New York. 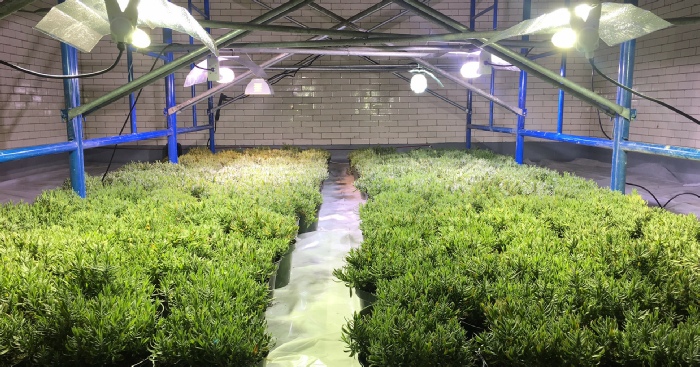