La Terra Inquieta (The Restless Earth) borrows its title from a collection of poems by Édouard Glissant, an influential Caribbean writer who probed the question of how different cultures can coexist amid a polyphony of voices and narratives. Through the works of more than 65 artists from 40 countries—including Albania, Algeria, Bangladesh, Egypt, Ghana, Iraq, Lebanon, Morocco, Syria, and Turkey—the exhibition analyzes representations of migration and of the current refugees crisis in art, media, and visual culture.

La Terra Inquieta explores real and imaginary geographies as it drafts a choral portrait of multitudes on the move. Through personal biographies and collective tales of exodus, the exhibition focuses in particular on how artists bear witness to historic events and how art can address social and political change. Refusing the omniscient narratives of history and the media alike, many artists in the exhibition approach image-making from a personal perspective: their works combine traditional modes of journalism and documentary with narrative techniques typically found in literature, autobiography, and fiction. It is through this clash between dissonant forms of storytelling that many artists bring an element of doubt and critique to the visual representations of the mass media, revealing a new faith in art’s duty to describe and transform the world. Rather than simply illustrating conflict, their images and words provide a space for the exchange of multiple viewpoints and narratives.

Together, these artists’ stories—poised between historical epic and real-time diary—yield a vision of art as lyrical reportage, sentimental documentary, and vital testimony. In many works, a visible sense of indeterminacy is transformed into a narrative method. One of the exhibition’s key questions concerns the function and supposed truthfulness of images in times of crisis: for many artists in the exhibition, images are meant to seek truth in crisis, while, at the same time, inducing a crisis in the concept of truth as a single, simplistic narrative.

La Terra Inquieta also sparks a reflection on the right to one’s own image. Many artists in the exhibition seek new ways of depicting migrants and refugees, intentionally countering the media’s staging or spectacularization of tragedy and trauma by portraying migrants as historical and political agents or by shielding them from the scrutiny of media.

In the exhibition, this quest for dignity through images is also accompanied by an investigation of sculpture and its commemorative function. Many artists in La Terra Inquieta engage the tradition of the funerary monument from a contemporary standpoint, alluding to a state of precariousness that charges their works with a radical sense of indignation and urgency.

Many works in the exhibition are predicated on images that are unstable and oblique—images that are themselves “migrant,” as art historian T.J. Demos has described them. At the heart of the exhibition is the complexity that arises from the movement and migration of people, bodies, commodities and forms across borders and barriers, whether ideological or economic. The works in the exhibition compose an atlas of global connections and interactions in which art seems to mirror the traffic of goods in the international economy. Through the collective voices of the works in the show, La Terra Inquieta configures itself as a story of humanity crossing borders and—more tragically—of borders crossing humanity.

An exhibition curated by Massimiliano Gioni

Francis Alÿs in collaboration with Julien Devaux, Felix Blume, Ivan Boccara, Abbas Benheim, Fundaciéon Montenmedio Arte, and children of Tanger and Tarifa, Don't Cross the Bridge Before You Get to the River, Strait of Gibraltar, 2008. Video and photographic documentation of an action. Courtesy Francis Alÿs and David Zwirner, New York/London. 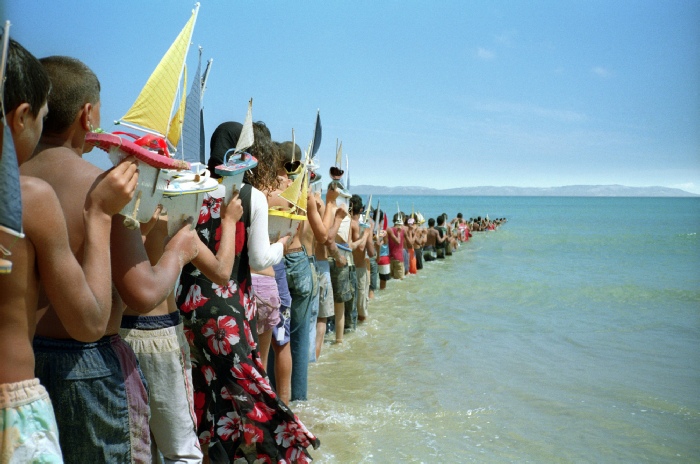