The Deep Listener (2019) by Danish artist Jakob Kudsk Steensen (b.1987) is an audio-visual ecological expedition through London’s Kensington Gardens and Hyde Park, the area surrounding the Serpentine Galleries. Designed as an augmented reality and spatial audio work downloadable as an app for mobile devices, it is both a site specific public artwork and a digital archive of species that live within the park. It pushes the utility of augmented reality and technological tools to transform our spatial understanding of the natural world. The commission expands upon Kudsk Steensen’s practice of merging the organic, ecological and technological in the building of complex worlds in order to tell stories about our current environmental reality. Using tools and platforms from a range of fields including video games, computer generated images and film and inspired by ecological science-fiction and scientific research, Kudsk Steensen creates a form of "slow media" that uses the technological to foster attention rather than distraction.

Selected as the first Serpentine Augmented Architecture commission in collaboration with Google Arts & Culture and Sir David Adjaye OBE, Kudsk Steensen responded to the global open call for new forms of architecture by examining the systems and infrastructure of the park and its species, and the legacy of human impact across time. At the core of the work is the London plane tree, a hybrid of two sycamore and plane trees from different sides of the world, that functions, as Kudsk Steensen states as "an early form of bio-architecture." Planted liberally throughout London during the Industrial Revolution, the tree can withstand extremely polluted conditions and the bark absorbs pollutants to protect the tree itself and clean the air we breathe which is then regularly shed. The bark becomes an archive and historical document of particles and pollution that connects our bodies to the species that cohabit the park.

The Deep Listener invites you to be guided on a journey to both see and hear the sights and sounds of five of London’s species: London plane trees, bats, parakeets, azure blue damselflies and reedbeds, that are part of the park ecosystem that might otherwise be ignored, intangible or simply invisible. Drawing on the principles of deep listening, a slow and embodied process of attentive and embedded listening in order to reflect and learn, Kudsk Steensen has collaborated with the field recordist and sound designer Matt McCorkle to represent five species as sound. Mirroring the process of field work undertaken by Kudsk Steensen, both the audio and visuals within the project are drawn directly from organic source material gathered from a period of embedded research within Kensington Gardens and Hyde Park. These organic materials are then transformed through digital processes to be re-embedded within the same context. As you move through the augmented reality encounters of the commission, these soundscapes can be sped up and slowed down according to your proximity to the ecological visualisations in order to reveal the complexity and nuances of non-verbal aural languages and shift your own relationship to time. Through these interactions, your own body becomes the mechanism to alter the environment around you and the technology becomes an active form of communication between the human and non-human actors in the park.

Through The Deep Listener, Kudsk Steensen builds an experience for users to explore the sublime and vexing power of our ecosystem. The park becomes, as it has throughout history, the architectural backdrop to access the natural world that exists within the city. 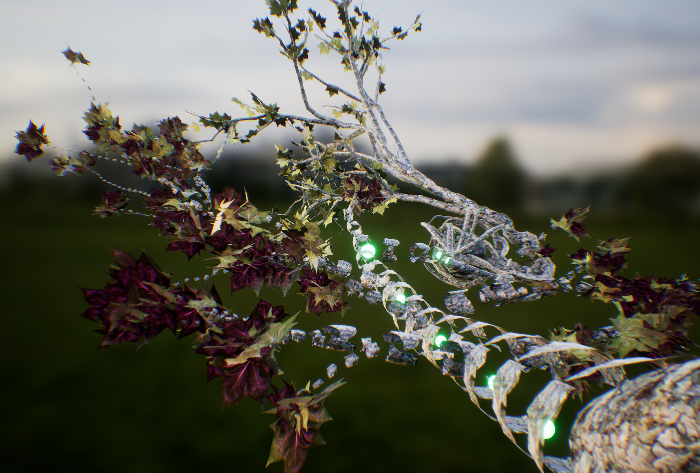