For more than 20 years now, Armin Linke's work has dealt with how mankind uses technology and knowledge to transform and develop the Earth's surface to adapt it to its needs. His films and photographs are observations of the changes humans have made to the land, oceans, and biosphere.

An earlier work of Linke's from that field of inquiry, The Anthropocene Observatory, a project by Territorial Agency (John Palmesino and Ann-Sofi Rönnskog) and Anselm Franke, was realized in 2013–14 and documented how scientific and political institutions discuss the issues of climate change, nature conservation, and geology.

Linke accompanies scientists, representatives of leading research institutions, and local actors on their research trips and in their laboratories, to observe their different procedures and show the interconnections that affect all of their activities. Through his lens, we not only gain insight into crucial behind-the-scenes practices and negotiations—such as environmental management strategy making and the rules surrounding the study of mineral resources—but also into the complex processes of science and the scientists' working methods, which Linke renders visually understandable, ultimately arousing wider interest in important current oceanic research.

Inspired by Alien Ocean, a captivating book by anthropologist Stefan Helmreich on microbial oceanography, Linke met key actors and influential experts from the marine sciences. His interview subjects include marine biologist Prof. Dr. Antje Boetius, of the Alfred Wegener Institute Helmholtz Centre for Polar and Marine Research in Bremerhaven, and marine geologist Prof. Dr. Gerold Wefer, of the IODP Bremen Core Repository- MARUM in Bremen, and he filmed on location at the Institute for Chemistry and Biology of the Marine Environment at Carl von Ossietzky University in Oldenburg.

We review the expeditions undertaken by Prof. Dr. Ann Vanreusel and Prof. Dr. Peter Schupp onboard the research vessel Sonne, and Dr. Matthias Haeckel explains one of the world's leading marine sciences institutes GEOMAR - Helmholtz Centre for Ocean Research in Kiel. In the laboratories of RWTH Aachen University, processing concepts and solutions for marine mineral resources are explored, while geophysicist Dr. Volker Steinbach of the German Federal Institute for Geosciences and Natural Resources expounds upon questions of marine resource exploration. Dr. Alexander Proel, professor of law shares the focus of future legal regulative issues from international law and sea-level rise to the regulations of marine genetic resources.

Erik van Doorn, law expert, from the Walther-Schücking-Institut for Internationale Law of the Christian-Albrechts-University, Kiel explains the historical developments of the Law of the Sea starting from the 16th century.

Dr. Ursula Röhl, Marine geologist, shows the procedures at the International core repository at the University of Bremen, part of the Integrated Ocean Drilling Program, containing 154 km of deep-sea cores from 89 expeditions in around 250,000 boxes.

In collaboration with the video archives of the GEOMAR, Helmholtz Centre for Ocean Research Kiel and Marum, Center for Marine Environmental Sciences, Bremen, Armin Linke edited film footage from several scientific expedition where high-tech underwater Remote Sensing Vehicle was used. The operational images edited in a four-screen immersive composition presents the ROV Footage as a choreography, where the video-camera and the complex geological and biological operations of robotics arms, at a depth of often deeper than 5000 meters operate, like extensions of the pilots and the body of the scientists in a suspended and distant space. The idea of an empty deep water oceanographic space is contradicted by the encounters mediated through the visualization technology.

Rather than giving answers, Linke's project raises questions-the matter of how to design our planet's future. Addressing issues of deep sea mining, biodiversity, the common heritage of mankind, sustainability objectives, and environmental strategy, as well as discussions and negotiations on questions surrounding key regulations, its aim is to serve as a tool in the creation of visualization to aid understanding and possibly to create new awareness on the topic of the oceans.

Oceans is an official project of the Year of Science 2016*17—Seas and Oceans, a program of the German Federal Ministry of Education and Research. The project was commissioned and co-funded by Thyssen-Bornemisza Art Contemporaiy (TBA21), Vienna. 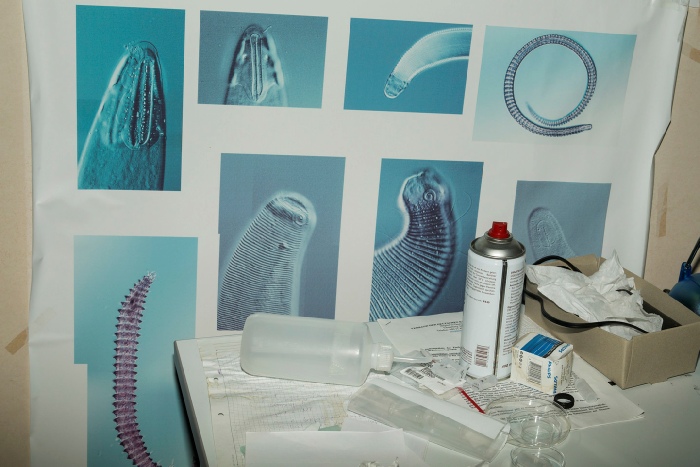