Sand is the framework of the world, the foundation of modern technologies, the seemingly inexhaustible, invisible yet fundamental material of built habitats and digital communication devices. In order to extract it, beaches are transported away, seabeds sucked out, gigantic pits are excavated, mountains piled up. At the same time, however, sand manifests countless stories of dispossession, forced resettlement, persistent colonial power relations, oppression and exploitation; sand also holds manifold spiritual meaning as the (un)resting place of bones.

In the jointly designed space in the exhibition hall at Kunsthaus Hamburg, the four artists and musicians explore stories with and around sand. From different perspectives and in hybrid formats visual, acoustic and performative artistic means intertwine. Performances, workshops, talks and concerts will be held within the setting of an expansive installation, but during the exhibition this is also the setting where rehearsals, productions or improvisations are to take place. The artistic works, for the most part created for the exhibition, consist of ephemeral materials such as fabric and sand, the sounds of dry ice and conversations on journeys between Namibia, South Africa and Germany.

!Hū means sand, earth, land in the Khoekhoegowab language spoken in Namibia and South Africa. If “i”is added (!Hūai) it means The Face of the Earth.

Garth Erasmus creates his works against the backdrop of the present and history of South Africa’ indigenous population, the KhoiSan, to which he belongs. He challenges the hegemonic constructions of the “oloured identity” which are based on exclusion and continue to impact society, even after the end of apartheid. Through his exploration of pre-colonial history, he re-appropriates indigenous knowledge by transforming the musical bow of the KhoiSan—entral to his work and found in ethnological museums—nto an electrified hypermodern tool. The exhibition will feature a number of bows and other instruments/objects made by Garth Erasmus. A new cycle of sand paintings which he created partly in South Africa and partly on site in Hamburg, will also be on display.

Ruth May’ works translate materiality both into the surface of the painting and back into space. For Sand !hū. Sand, she has developed large-scale textile pixel landscapes and a series of paintings representing landscapes made of fabric.

Nesindano Xhoes Namise works, among other things, as a voice artist and explores with experimental sounds, as well as on "aural narratives" as a historical discipline. In her spoken word performances she deals with cultural memory processes, questions of restitution of the intangible and genderqueer issues. She contributes significantly to the collective design process underlying the exhibition with her knowledge and perspective. In doing so, she encourages reflection on the construction of perceptions. With several performances, talks and concerts, she is significantly involved in the project with live performances.

At the centre of Peter Thiessen’ work is the relationship of sound and music to language. With the lyrics, he explores various states of the “n-between” the ghostly, the spectral and the zombified. For Sand !Hū Sand he has developed a series of musical pieces dealing with the largest known pile of sand: the planet Mars. Using the materials occurring on Mars—and, metal, dry ice and water—e has composed a speculative soundtrack in which the agency of inanimate matter becomes audible. 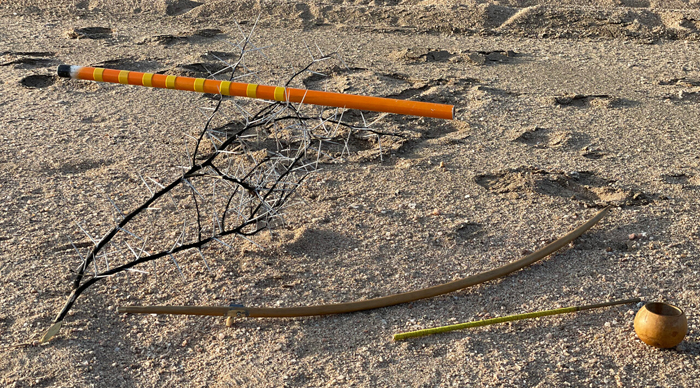