Nancy Holt / Inside Outside explores the artist’s rich artistic legacy through a selection of works spanning 1967 to 1992. This is the most ambitious exhibition of her work to date. Perceptions and demarcations of being “inside” and “outside” guide this survey exhibition.

Holt herself was an insider and an outsider: she was a key member of the Earth, Land, and Conceptual art movements, yet her work is far lesser known than that of her male peers—a situation this exhibition strives to amend. Highlighting Holt’s commitment to perception, light, and space, Nancy Holt / Inside Outside presents several previously unseen photoworks, and the first posthumous presentation of two System Works, with Ventilation System (1985–92) literally moving inside and outside of the architecture of the museum.

Nancy Holt, Inside Outside

In 1973, Holt started to research her ideas for her landmark Sun Tunnels (1973–76), creating Instamatic photo studies testing the possibilities of how vision might be focused through a sculpture located in a landscape uninterrupted by buildings and roadways. In this exhibition, these small-scale images are paired with photographs of Sun Tunnels by the influential photographer Richard Misrach (b. 1949) made fifteen years later, each measuring ten by eight feet. Placed in the context of audio and moving image works observing travel through the North American landscape, Holt’s 1986 series Alaskan Pines and Athabascan/Russian Graveyards, as well as her 1969 Miami Puddles (1969) are likewise exhibited for the first time.

Underpinning this 25-year survey is a call to look deeper and think harder about how humans try to find their place in the world through systems and vision, as well as through the systematic distinctions between “inside” and “outside.” The exhibition launches at the time of the summer solstice when the city of Umeå, located close to the Arctic Circle, has white nights echoing Holt’s consistent tracing of the sun, moon, and stars in relation to our place on the planet.

Nancy Holt / Inside Outside is produced by Bildmuseet in collaboration with Holt/Smithson Foundation, and in partnership with MACBA, Barcelona. Curators: Lisa Le Feuvre and Katarina Pierre. The exhibition is accompanied by a book published in the autumn by Monacelli Press, with texts by Karen Di Franco, Teresa Grandas, Lisa Le Feuvre, James Nisbet, Katarina Pierre, and two texts by Nancy Holt—a previously unpublished self-interview and a reflection on the ecological aspects of her work.

With support from Fort Knox, the Barbro Osher Pro Suecia Foundation and the Henry Moore Foundation. 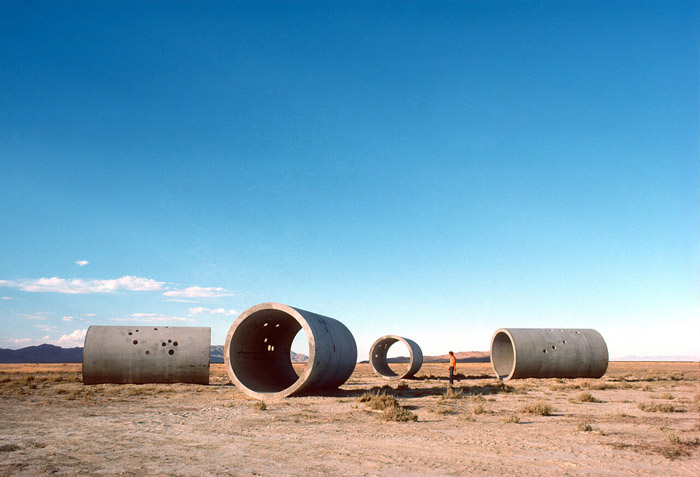