With the exhibition Folkwang and the City, the Museum Folkwang is leaving its familiar terrain and moving into the public space of Essen’s City Nord from May 21. Along a tour, 13 artistic projects by prestigious artists such as Jeremy Deller, Anouk Kruithof and Simon Starling can be seen. Five special projects with numerous protagonists accompany the exhibition project. The central venue is the Berliner Platz. In addition to the international artists, many local initiatives are involved. The exhibition is complemented by an extensive programme of events.

Folkwang and the City

The exhibition project Folkwang and the City, which was developed together with MAP Markus Ambach Projekte, questions the role of the museum in the year 2022. The idea for the exhibition in Essen’s urban space, which came about three years ago, is based on the fundamental idea of Folkwang founder Karl Ernst Osthaus, who was convinced that “without the participation of art, the most important questions of social life are not solvable.” With this in mind, an active exchange began with the city’s citizens, various initiatives and communities, start-ups, retailers, representatives of the administration and urban planning, humanitarian organisations and foundations to discuss common challenges such as integration, cultural diversity, the climate crisis, globalisation and digitalisation. The central question circles around how living together in the city should be shaped in the present and in the future. In the context of the exhibition, these topics are not negotiated in the institution of the museum, but where the people of the city live, in their immediate neighbourhood.

The artistic and social projects can be experienced along a parcours through Essen’s City Nord. Starting at Berliner Platz, whose traffic roundabout will be transformed into an “Eco-Village” around sustainable future perspectives, the tour leads past Weberplatz and Kopstadtplatz, via Viehofer Straße into Eltingviertel and through the “grüne mitte essen” back to the starting point. Along the route, in addition to establishments such as the “Konsumreform” shop, vacant restaurants, clubs and display window spaces, the tattoo studio “Art Faktors” and public squares will become the venues for the various art projects.

Works from the museum collection are also represented in the urban space exhibition: For example, Anouk Kruithof’s video installation Universal Tongue with dances from all over the world is shown in the former tabeldance bar “Naked” in Rottstraße. The artist Fari Shams is moving a contemporary double of the bronze sculpture The Brazen Age by Auguste Rodin from the Museum Folkwang into the city space, and the Deutsches Plakat Museum is moving temporarily into the living spaces of the IKEA furniture store. A special platform for local initiatives is provided by the “Expo Alternativ” at Kopstadtplatz 10, where associations such as “Hey, Alter!,” which refurbishes used computers for schoolchildren, and “Stadttauben Essen,” which looks after urban “roommates” who have fallen into disrepute, present themselves. Projects such as the RAA, which offers boxing and martial arts to support children and young people from immigrant families and promote understanding between cultures, are also represented here. Contemporary installations by the artists Isabella Fürnkäs and Neïl Beloufa interact with the spatial situation and the social projects that deal with religion, animal welfare, food sharing and climate protection. In the close vicinity, the artists Paula Erstmann and Mascha Fehse work at the Church of St. Gertrud with the Essener Tafel e.V. on the topic of food culture. The two British artists Jeremy Deller and Simon Starling draw a historical arc with their projects from the museum’s founding in 1922 to the city’s present. 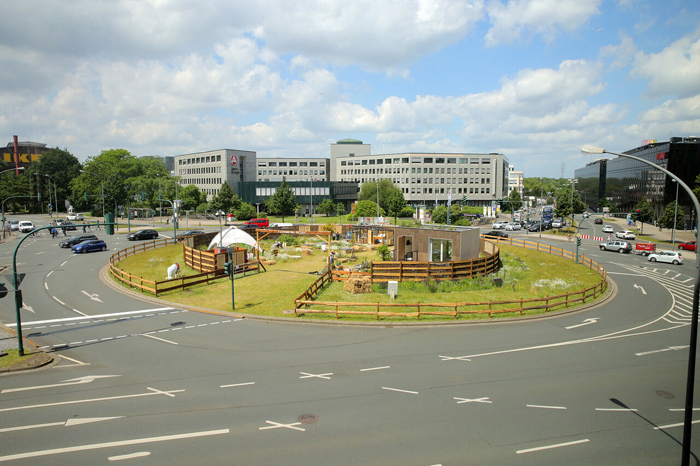