Fashion Show presents works by Irish and international contemporary artists that look at clothing as subject matter, material, and as a form of advocacy. From explorations of the ways in which fashion lends itself to self-representation to investigations into the economic and ecological effects of “fast fashion,” the exhibition reveals how clothing becomes a means of activism and protest.

Alicia Framis’s series Is My Body Public? presents images of 14 women holding forth sheets of transparent fabric, each embroidered with the title phrase in their respective languages. While resembling pieces of lingerie, the dresses are actually banners for demonstrations, having been worn in the artist’s public performances. Anna-Sophie Berger’s sculpture The Wearer of Clothes takes the shape of a classic ballgown with an underlying iron skeleton similar to historic crinolines. However, a central opening also alludes to tents, suggesting that fashion and personal style can serve as a mode of protection and shelter. Tenant of Culture’s textile works reveal the relations involved in the production, distribution and consumption of fashion. Her “chore coats”—practical utilitarian outerwear that has become fashionable amongst middle-class urbanites—are displayed as large sheets of fabric, printed with ready-to-cut outlines of sleeves, collars, and vests. Sinéad O’Dwyer’s sculptural works in silicone mesh utilise techniques in design, tailoring and casting to trace the undulations of the female body, challenging its representation as an idealised form and singular shape.

In Malick Sidibé’s iconic photographic portraits of Malian youth culture, the artist invited his subjects to present themselves in their best, most stylish, outfits. Through his Bamako-based Studio Malick, his images capture the particular shift in atmosphere as society transitioned from French colonial rule to independence in the 1960s. Lucy + Jorge Orta’s collaborative practice includes wearable objects that enable participation, communication and interaction between strangers; their series of backpacks are outfitted with seemingly ordinary items that reference various states of emergency. Wang Bing’s film 15 Hours was shot in Zhili, Huzhou, in the province of Zhejiang, and home to around 18,000 small factories for children’s clothing, manned throughout the year by over 300,000 migrant workers. This film documents one day in the lives of the workers of 68 Xisheng Road in Zhili.

Made from everyday materials such as clothes, rags and wool, Sibyl Montague’s blanket-like sculptures foreground domestic and gendered crafts of sewing, wrapping, weaving, quilting and needlework, taking form through acts that are synonymous with caregiving. Gluklya’s installation Clothes for demonstration against false election of Vladmir Putin was originally created for the 56th Venice Biennale in 2015. Items of clothing are adorned with slogans shouted during protests in St. Petersburg and utopian visions written by the artist and her friends that envisage a better, more just, society. Gender, ethnicity, and class play an important role in Evelyn Taocheng Wang’s work. In Photosynthesis, fifty colour photographs, each taken in a different European location, show Wang in outfits by the French designer agnès b., a signifer of Western sophistication often marketed to Asian consumers.

Curated by: Chris Clarke and Fiona Kearney as part of the Creative Europe BEAM UP project

Fashion Show is part of BEAM UP, a Creative Europe funded project to encourage the participation of people who are visually impaired in the planning and experience of museum activities. Fashion Show: Clothing, Art and Activism is supported by the Arts Council of Ireland, Creative Europe Programme of the European Union, and University College Cork. 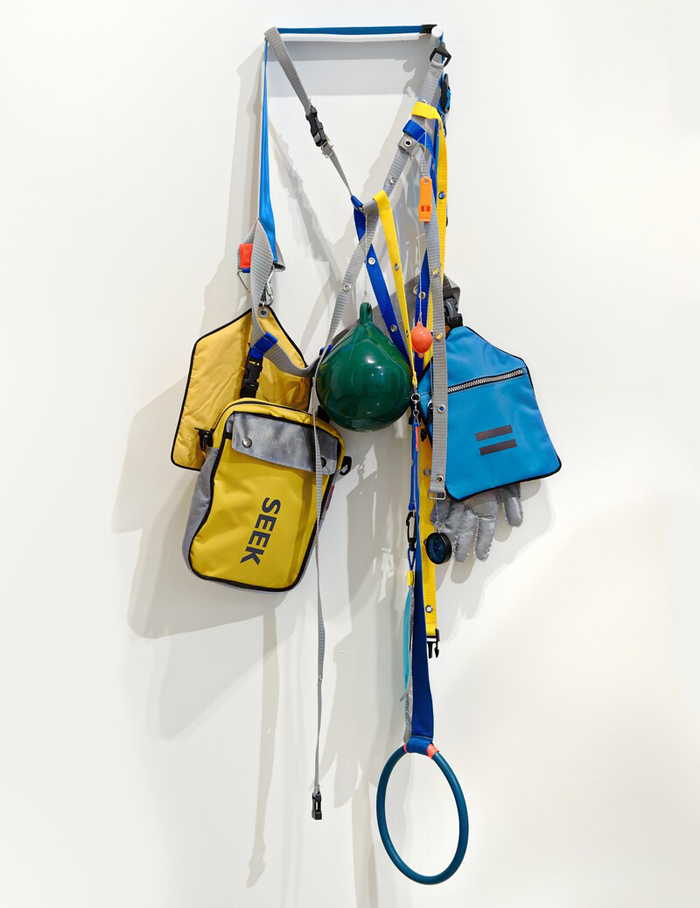