The exhibition reunites Kyzyl Tractor Art Collective, noted for their feverish experimentations in the mid-1990s and early 2000s, after almost two decades of working both separately and occasionally together. Known for reorienting nomadic, Sufi, and shamanistic philosophies as a new artistic language over the past three decades, their work continues to chronicle the seismic socioeconomic and political shifts in Central Asia.

Constant nomadic movement, a common narrative of the 1990s, is present in most of Kyzyl Tractor’s performances, sacred materials such as wood, wool, felt, and other textiles found in the steppes of Kazakhstan are frequently used, along with instruments like the shan-kobyz, dombra, and drums. The principles of the spatial-structural composition school and dervish, nomadic and Tengri heritage are visible in the first ten years of their performative practice.

The show comprises two monumental sculptural works—one newly conceived and a reproduction of an older destroyed drum as part of a renowned performance Purification that occurred 20 years ago. On October 14, the opening day of the exhibition, the collective will reenact this legendary performance ritual at Mana’s entry steps.

Central to the exhibition is an installation of over 45 paintings by Moldakul Narymbetov—the artist, baksy (shaman), poet, philosopher and former lead member of Kyzyl Tractor—showcasing his work from the 1980s until his passing in 2014. Numerous sculptures, paintings, drawings, found objects and other paraphernalia by current key members Smail Bayaliyev, Said Atabekov, Vitaliy Simakov, and Arystanbek Shalbayev are also included alongside numerous archival photos of the collective’s earlier performances.

Developed around curator Leeza Ahmady’s thesis of “seeing the artist as the first collector and their studios as collections,” the show is staged as a powerful energetic container for the group’s entire artistic oeuvre—an accumulation of the artists’ seeing, feeling, experiencing and questioning the world together. The second portion of the exhibition title, “Telling Tales,” alludes to Kyzyl Tractor’s enduring use of mythology and fiction as a strategy for unearthing profound hidden truths within the labyrinth of modern, living and societal conformities. Thinking Collections: Telling Tales is not only concerned with the stories being chronicled by the collective’s works, but also the story of Kazakhstan itself.

From the Soviet fall through the country’s process of reclamation, Kyzyl Tractor’s earlier works scrutinize structures of national Kazakh identity, memory, and ritual, and, more broadly, humanity's socio-psychological programming as a call to consciousness in relation to nomadic philosophies in a modern world. The member’s recent individual works address the country’s booming economic growth and steady integration of global financial practices, the role of digitalization, commerce, climate degradation, and the clashes of civilizations in our present history, referred to as the age of Anthropocene.

At the core of Kyzyl Tractor’s practice is a Sufi call to questioning the truth— a multilayered inquiry guided by the spirit of all things connected to nature, the cosmos and living in the present moment. This notion of time and truth is particularly apparent through the collective’s radical, open-air performances and monumental sculptures, which are unquestionably created as ephemeral acts that reject the rules of traditional institutional spaces, exhibition making, and collection building.

At the crossroads of a historical moment, where there is such a polarity of differences raging across so many countries and regions, it is a befitting challenge to organize an exhibition of such unfamiliar content in New York. Being a relatively isolated art scene, the artists working in Central Asia are distant enough to observe not only their own local historical processes but are engaged in transnational art discourses. Thinking Collections: Telling Tales, in turn, creates a thought-provoking arena for critical analysis, not only regarding the artistic disposition of a nation nestled in the heart of a large continent but also confronts how artists process reality and document a world in constant flux. 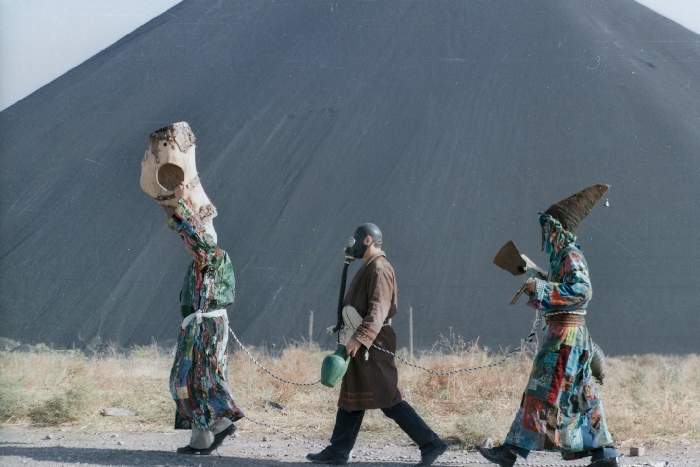