TBA21–Academy is pleased to announce the reopening of its Venice venue, Ocean Space, with the exhibition Territorial Agency: Oceans in Transformation, curated by Daniela Zyman, on Thursday, August 27, 2020. Commissioned by TBA21–Academy, the foundation that drives a rigorous art-science practice and cross-disciplinary research to support artistic imagination and ocean advocacy, the exhibition inaugurates the second season at Ocean Space in Venice, striving to contribute to the reawakening of Venetian cultural institutions.

Territorial Agency: Oceans in Transformation synthesizes three years of research to unfold one of the most extensive readings of the Anthropocene ocean to date. The project explores new ways of connecting research groups that address the oceans at a time of rapid change, linking science, arts, and politics by way of shared images, datasets, and narratives. The research project has unfolded over several years through interactions with hundreds of scientists, research institutions, intergovernmental organizations, scholars, activists, policymakers, and artists.

Oceans in Transformation re-assembles scattered knowledge about the oceans along complex geographical trajectories. The trajectories indicate the intricate interrelations between forms of the Earth System and forms of human cohabitation. As they span the planet, they reveal the magnitude of the impact of human activity on the oceans. They offer a momentary glimpse into humans’ relation to a multiplicity of oceans in transformation, and a premonition about the future of these relationships. They indicate how fragmented and incoherent the knowledge of the oceans still is, forming an invitation to collaborate and think together how to safeguard the future of the oceans and their cohabitants.

Oceans in Transformation aims to find different forms of collaboration to bring together things that we imagine are apart. The research project indicates how we need to imagine the oceans as a principal component of a living planet, limit human activity—fishing, transport, and extraction—in the high seas, and allow marine environments to regenerate. Solutions to face the threats facing the future of the oceans are known: what is missing is the imagination to act.

“We talk about the oceans as a plural. The diversity of the oceans is not only a multiplicity of different viewpoints. While there is only one vast body of water with interconnected circulations, human understanding is fragmented and scattered and produces a multiplicity of apparently incompatible oceans. Hence, the primary intention of Oceans in Transformation is to bring together as many of these modes of being of the oceans as we can and start forming a collaborative space.”

Addressing the changing habitats directly on the transforming waterline, sea-level rise projections based on reports by the Intergovernmental Panel on Climate Change are visualized throughout the exhibition as well as on the facade of Ocean Space: When above…, a light installation by Territorial Agency has been unveiled this May to call attention to the latest predictive models of sea-level rise. A LED horizon marks the future sea-level locked in by global warming—+6m in the next century—and calls attention to the vulnerability of the oceans and the human communities dependent on its wellbeing.

“Attempting to visualize the planet from a post-continental vantage point means abandoning a set of hierarchical conceptions which not only describe spatial and cultural relationships but more so, conditions of dominance: West/East—land/ocean—Global South/Global North—but also culture/nature; naming conventions and translations; and other manifold forms of racial /sexual /gender /spatial /spiritual /aesthetic /economic /etc. normativities. 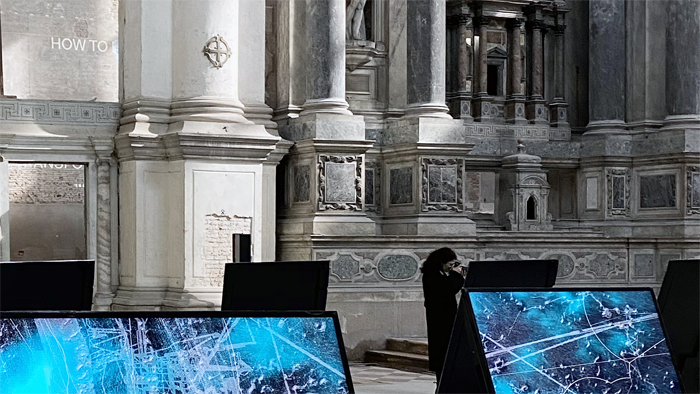