The private foundation Per Amor a l’Art presents Sheela Gowda. Remains at Bombas Gens Centre d'Art (València) by Sheela Gowda (born in Bhadravati, Karnataka, India, 1957; lives and works in Bangalore). This exhibition, first solo show in Spain, has been organized in collaboration with Pirelli HangarBicocca.

This exhibition gathers a wide selection of works from Gowda, all made since the 1990s until today. During that time she has developed a poetic and political practice based on an attentive gaze at the world, an acknowledgement of the ability of matter, objects and remains to transmit and symbolise, and the engagement with the process of definition of form as a way to transform meaning.

Sheela Gowda was initially trained in painting at Baroda’s university and at Visva-Bharati in Santiniketan. These academic contexts were shaped by the Indian modernist tradition, characterised by an interest in the vernacular, in popular imagery and in traditional crafts, but also open to the use of different techniques and to new ways of responding to different situations. When Gowda returned from London in the mid-1980s, after completing her postgraduate studies at the Royal College of Art, she started her transition from the pictorial space to three-dimensional works, making works that involved the direct manipulation and quiet but tenacious confrontation with a series of new materials that she gradually added to her work, such as cow dung, tar drums, pigments, human hair, needles, incense, thread or rubber.

The nature of her work seems to rely on situations that are common and extraordinary at the same time, where the “immediate” information communicated by a material—such as its texture, smell or substance—is in direct dialogue with the systems in which it is mediated, and in which we are accustomed to experience it, be them economic, political or ritual.

Her dialogue with such materials leads to abstract proposals, but for Sheela Gowda abstraction doesn’t imply losing meaning or motive. Instead it confirms that a specific form always carries multiple significations. Her works cling onto matter, sensations and emotions. And through that set of connections pose fundamental questions about our presence in the world, about the passage of time and its relative transparence.

For the artist the liturgy—the transformative ritual that occurs during a highly performance-based process of manipulation, confrontation and conversation with her materials—remains fundamental. Sheela Gowda redefines the pathos of things, their feelings and affections; a relational condition between objects, their reasons for being and their behaviors. It is a “moment of encounter,” understood not as a moment in time but as a kind of force that allows a particular set of circumstances to come together.

The exhibition is curated by Nuria Enguita, Director of Bombas Gens Centre d’Art, Valencia; and Lucia Aspesi, Assistant Curator at Pirelli HangarBicocca. It's a unique opportunity to discover more than 25 years of Gowda’s production. 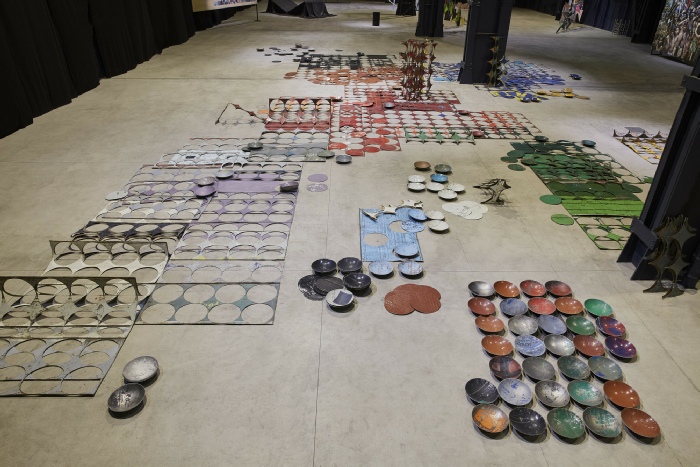