The international group exhibition Possessed Landscapes deals with the artistic representation of landscape, but not in its art historical depiction as a place of recreation, as an allegorical tool, or as a stand-in for a higher beauty. Instead, the exhibition investigates the relation between humans and the land through the lens of extraction, exploitation, and colonization.

International archives 1st half of 2020

The exhibition’s title, Possessed Landscapes, points to the ways in which Indigenous concepts of land as inhabited by ancestors are being displaced by industry’s possession of land through boundless extraction, creating a widespread landscape of greed and disconnect.

The invited artists each engage with land that has been transformed by industrial extraction technologies to such a radical extent that the adaptation to these changes by the people who live there is unavoidable. Those who inhabit these dystopic landscapes often appear as foreign bodies—a position they have usually have been forced into. That is, the exploitation of the landscapes depicted in the included artworks often begins with the expropriation of land and the disenfranchisement of the people living there.

At the centre of the exhibition is the newly commissioned work by the Uzbek German artist Viktor Brim, which investigates one of the largest diamond mines in the world, the Mir in Yakutia, Russia. In Brim’s Imperial Machine (2020), a continuum is drawn between the resource policies of Joseph Stalin’s Soviet Union and Vladimir Putin’s Russian Federation, particularly through the Mir diamond mine and particularly in their colonialist strategies. The work combines a film that Brim shot on location, a site-specific architectural installation, and a new publication compiling the artist’s archival research on Soviet and Russian rhetoric, along with a selection of materials for display. While the film offers a complex consideration of the impact of successive regimes on a particular landscape, Brim’s focus on Siberia also invites a broader reflection on resource extraction globally. 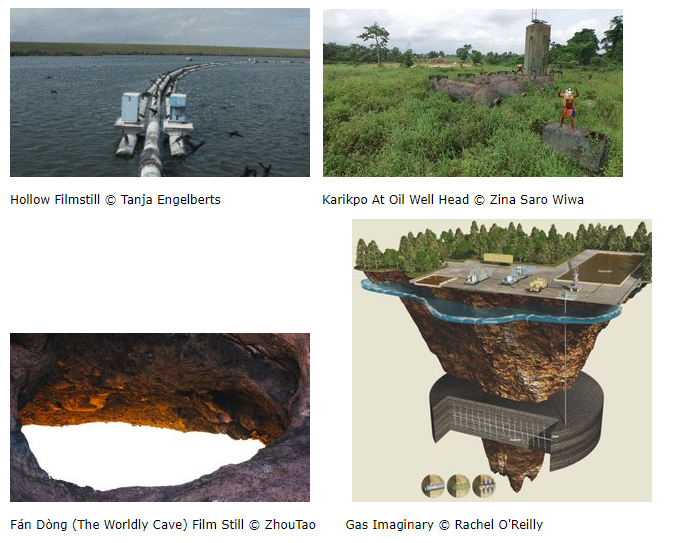 Rachel O’Reilly’s Gas Imaginary (2013-2019) is a recently completed long-term research project that will premiere in Germany as part of the Possessed Landscapes exhibition. As Australia becomes the world’s leading exporter of fossil gas and the EU plans to increase imports, First Nations communities in the settler colony are on the frontline of gas plans posing unprecedented threats to ancient groundwaters, law and culture. Returning frequently to Gooreng Gooreng country and in dialogue with Indigenous academics, and activists from the Protect Country Alliance, archi-poetic diagrams, 3D film, corporate plans, and activist drone footage are used to explain the role of racialized settler property models in contributing to today’s ecocides and violently uneven planetary crises. In the context of Possessed Landscapes O'Reilly's animations with Pa.LaC.E and Sebastian Bodirsky show a fascinating relation to Brim’s work, as the Mir project represents the modern model of vertical mining and the glorification of land abuse, meanwhile The Gas Imaginary considers the horizontal nature of fracking, a type of toxic extraction as part of the colonial project, which continues in newly evasive forms today.

The exhibition also focuses on the juxtaposition of propaganda imagery that portrays industrial exploitation as an “adventure” story (such as the sales pitches of both the fracking industry and Russia’s diamond mining project) with the artists’ representations of the relations by which these landscapes—both social and environmental—were born.

Drone-captured imagery, a type of photography only recently made possible by emerging technologies, often appears in the exhibited projects, not because of the bird-like, spectacular perspectives it captures, but rather because drones are affordable, widely available tools for civil forensic investigations into industrial practices and the state of ecosystems. Such footage is used in Tanja Engelberg’s Hollow (2019), a video work based on the artist’s current research into an artificial Dutch island. The island is shaped like a ring dike and serves as a dumping ground for sludge from Dutch waters contaminated with toxic substances.

Zhou Tao’s film Fán Dòng (The Worldly Cave) (2017) pictures various locations across the globe. The video—which has no script or narrative—portrays people and animals adapting to life amid changing conditions, as well as a landscape in constant transformation. The landscapes of Fán Dòng appear somehow synthetic, and the depicted organic life and the experiences of bodies moving within these technologically developed infrastructures seamlessly intertwine as they individually and collectively undergo an incessant transformation of sorts.

Karikpo Pipeline (2015), a five-channel video installation by Zina Saro-Wiwa, was shot in Ogoniland, Nigeria, famous for its oil-rich plains. The Royal Dutch Shell oil company capitalized on this resource from 1958 to 1994, draining the land of its oil without regard for the area’s people or environment. Through this site of contention, Saro-Wiwa’s poetic video installation engages with the cultural and spiritual entanglements to land.

The works in Possessed Landscapes, spanning site-specific installations, videos, and video essays, tackle in diverse ways the strong contrast between capitalist and Indigenous concepts of land. They juxtapose capitalist ideas of land as something to be owned by people—“cheap nature” to be exploited without offering anything in return—and various Indigenous groups’ perspectives that refuse such parasitical relations and hold that humans are rather the ones owned by the land.