The Espace Louis Vuitton Venezia is pleased to announce the opening of its new exhibition paying tribute to French artist Pierre Huyghe. As part of the 57th Venice Biennale, this presentation has been produced in the framework of the Fondation Louis Vuitton’s “Hors-les-murs” program. This program showcases previously unseen holdings of the Fondation’s collection at the Espaces Culturels Louis Vuitton in Tokyo, Munich, Beijing and Venice, thus realizing the Fondation’s aim to mount international projects and make them accessible to a broader public.

Since the late 1980s, Pierre Huyghe has pursued a very personal, multi-disciplinary and hybrid approach, which is constantly evolving, drawing in particular from the worlds of film, science fiction, music, science and archaeology. His unique style is expressed through film, installations, performances, photography and drawings. For Huyghe, exhibitions are an opportunity to experiment with new ways of presenting his work, in a constantly redefined “format.” His ambition is to allow the visitors to move away from an “anthropocentric” perspective and instead, reflect on their complex relationship with the invisible world—animal, vegetal and mineral—and an environment that is under threat, through a process of deconstructing and reconstructing visual and emotional perception.

This exhibition of connected works revolves around A Journey That Wasn’t. This film is the result of a journey to Antarctica on board the Tara, belonging to the famous explorer Jean-Louis Etienne. The purpose of the expedition was to visit a new island that was formed by melting polar ice caps. An albino penguin was said to inhabit the fringes of the colony of its fellow creatures on this island. The project is expressed in two parts: the expedition itself and a translation of the island’s topography into sound. The sounds are then transformed into a musical score, which is performed by a symphony orchestra on the Central Park skating rink in New York. The film plunges the viewers into opposite worlds: pure and unspoilt nature and a spectacular urbanized society.

Creature reincarnates the solitary penguin as a small fiberglass bird with synthetic fur and sound, as a poetic complement to the film. According to Huyghe, it is more than a sculpture, it has “a unique intuition, far away, in an unreachable land where he/she nearly disappears in the surroundings.”

Silence Score forms part of the unreal and musical atmosphere created in the film and continues to disrupt our habits of perception. The four annotated scores were transcribed by Huyghe and, thanks to special software, include the imperceptible sounds of 4’33’’ (Silence) by John Cage, recorded in 1952. Cage’s concept was to have a musician play a few minutes of silence from a score without notes to focus only on the audible sounds of the surrounding space. 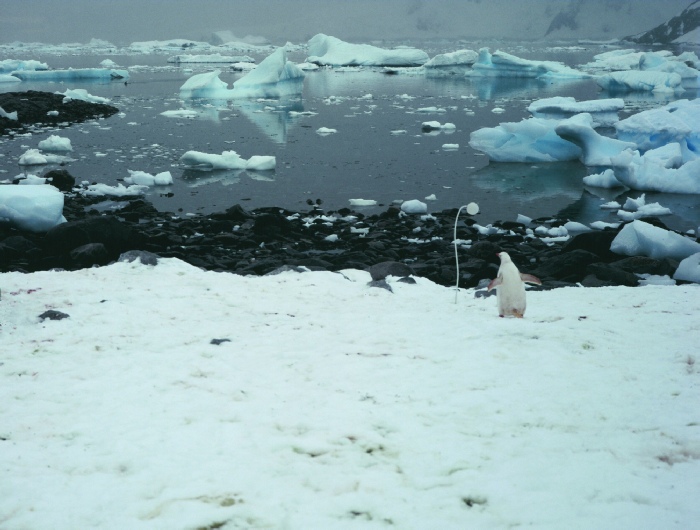