Otobong Nkanga (born in 1974 Kano, Nigeria) lives and works in Antwerp, Belgium. Her multi-disciplinary practice spans tapestry, drawing, photography, installation, video and performance, and addresses the politics of land and its relationship to the body, as well as the complex and fraught histories of land acquisition and ownership. Nkanga connects threads that reveal the entanglements of bodies, land and natural resources. This exhibition will be her first UK museum survey.

Yang’s works are known not only for their diversity of media and methods, but also for their eloquent and unique sculptural

Otobong Nkanga, From Where I Stand

Nkanga will create several new works for the Tate St Ives exhibition, including a site-specific wall painting, a sculptural installation and a performance. The show will also bring together recent works such as the woven textile with photographs The Weight of Scars (2015), the installation Tsumeb Fragments (2015), and the chromojet printed carpet From Where I Stand (2015), alongside paintings and photographs produced from the mid-2000s onwards, several of which will be shown publicly for the first time.

Nkanga’s works reflect on the processes and consequences of the extraction of natural resources from ethical, human and material perspectives. She explores the transformation of minerals into desirable commodities—including the use of mica in make-up to give glimmer and shine—as a commentary on the value placed on material culture, often at the expense of the environment.

The exhibition will comprise various constellations of works in the gallery space. A number of these works relate to Nkanga’s research into sites such as the former Tsumeb mine in Namibia, which reflect her wider interest in places that have been "emptied out" through the processes of extraction, both in terms of land and people. Other works such as Solid Maneuvers (2015) contain echoes of the mechanical actions of excavation itself, while From Where I Stand (2015) acts as a space for questioning and reflection. Nkanga is also producing a new performance piece relating to local and mythological histories and stories of landscape.

Nkanga received a Special Mention at the 58th Venice Biennale for her ongoing exploration across media into the politics of land, body and time. She was awarded the 2015 Yanghyun Prize and the 2017 Belgian Art Prize, and in 2019 was the recipient of the Ultimas-Flemish Prize for culture, and, with Emeka Ogboh, the Sharjah Biennial 14 Prize.

Nkanga has previously presented performance and installation works at Tate Modern in 2012 and 2015. She has exhibited widely internationally, with solo shows including: A Lapse, a Stain, a Fall, ar/ge kunst, Bolzano, Italy 2018; To Dig A Hole That Collapses Again, Museum of Contemporary Art Chicago 2018; Take Me (I’m Yours), Pirelli HangarBicocca, Milan 2017; and The Breath from Fertile Grounds, Temple Bar Gallery + Studios, Dublin, Ireland 2017. She has exhibited in recent group exhibitions including: Artes Mundi 8, National Museum Cardiff 2018; Manipulate the World, Moderna Museet, Stockholm, Sweden 2017, as well as in documenta 14 and numerous biennials including Venice, Dakar, Lyon, Berlin, Gwangju, Sharjah, Göteborg, Havana, São Paulo and EVA International. 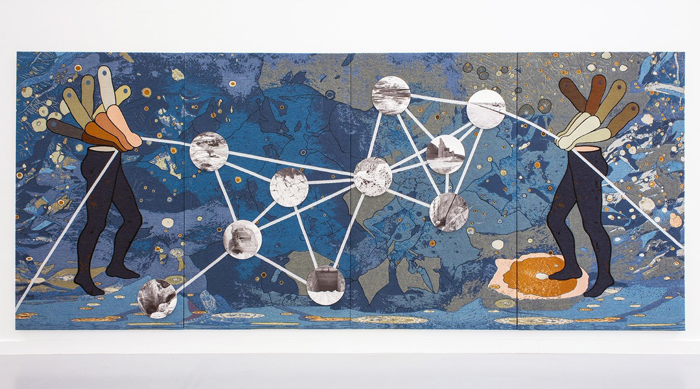