On October 14,  Nothing is Lost: Art and Matter in Transformation  opens to the public, curated by  Anna Daneri  and  Lorenzo Giusti. The show is the second chapter in the  Trilogy of Matter, a long-term exhibition project begun by the GAMeC in October 2018.

International Archives 2nd half of 2021

Nothing is Lots: Art and Matter in Transformation

The project involves  art historians,  curators,  philosophers,  and scientists, and addresses a  transversal debate around the theme of matter, while at the same time activating a dialogue with the history of scientific discoveries and drawing a comparison with the development of aesthetic theories.

The exhibition turns its attention to the work of those artists who, at various times, have investigated  the transformation of matter, drawing inspiration from the lives of the elements to develop a reflection on the reality of things, on change, and on time.

“Rien ne se perd” (“nothing is lost”)  is the opening to the famous maxim attributed to Lavoisier, with which the French chemist explained the general sense of his  law of the conservation of mass, which stated that over the course of a chemical reaction, the sum of the mass of the reactants is equal to the sum of the masses of the substances.  Matter, in other words,  cannot be created and cannot be destroyed. This fundamental principle would set the stage for a number of founding notions of modernity and hence to the progressively more elaborate belief in  matter which is always alive, always present, part of a world in endless transformation.

Nothing is Lost  will occupy all the exhibition spaces of the GAMeC, developing  an itinerary with a strong sensorial impact, given the material and synesthetic nature of the numerous works on display, on loan from  international collections both public and private.

With a rich selection of works, the show provides an articulated framework, one capable of highlighting the strong link which has always bound artists to the  chemistry of the elements  and the  transformation of matter. A field of study and experimentation which in our own era also constitutes a significant declination in terms of a  reflection on the impact of human presence on the natural equilibria  (from the availability of resources to climate change).

The exhibition will bring together  works from various eras, ranging from  Dada and Surrealist works, reflecting the interest of various artists—such as  Marcel Duchamp,  Max Ernst,  Man Ray, or  Leonora Carrington—in the  theme of alchemy, through to creations by some of the leading  exponents of the neo-avant-gardes—from  Yves Klein  to  Otto Piene, from  Robert Smithson  to  Hans Haacke—including compositions by artists akin to the poetics of  Arte Povera—Pier Paolo Calzolari  and  Paolo Icaro—sculptural works and installations  by artists who emerged in the  1980s—from  Rebecca Horn  to  Liliane Lijn—right up to the latest research of some of the most important international artists of recent generations, such as  Olafur Eliasson,  Wolfgang Tillmans,  Cyprien Gaillard,  Mika Rottenberg,  Otobong Nkanga,  Erika Verzutti,  and many others.

The exhibition catalogue will feature texts by the two curators with analyses of the works on show, carried out by art historians and international curators. Each section will be introduced by a  text of a scientific nature, looking at the theme of the exhibition from the points of view of expert researchers.

The exhibition will also draw on the collaboration of the  Fondazione Meru/Medolago Ruggeri for biomedical research, which between 2013 and 2017—along with the Associazione BergamoScienza and the GAMeC—promoted the prestigious  Meru Art*Science Award, fostering art projects linked to the development of scientific research. The new research program—Meru Art*Science Research Program—will finance the creation of  a site-specific project for the GAMeC’s “Spazio Zero.”  As part of  Nothing is Lost, the Swedish-born artist  Nina Canell  will present  a new environmental installation  designed to investigate the interface between the organic and inorganic dimensions, amid living and inert material.

The exhibition will be accompanied by a rich program of  activities for schools, and a  cycle of meetings open to the public, which will witness the participation of  scientists,  engineers,  chemists,  art historians,  artists,  and philosophers. 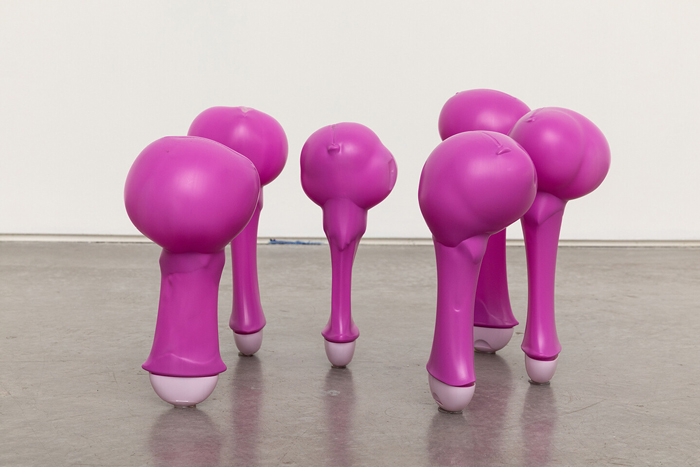