The National Museum of Art, Osaka presents the first large scale solo exhibition in Japan of work by Miquel Barceló(b. 1957), a Spanish-born artist who is widely active internationally as has travelled all around the world.

As a youth, Barcelówent diving in the sea around his native Mallorca, catching fish and octopuses with his bare hands, and experiencing nature firsthand. Even today, his rapport with the natural world continues to be a source of inspiration for his work. After traveling to Africa in 1988, Barcelócreated a studio in Mali, and made annual visits to the area for a period of 20 years. With local residents, who often find themselves caught up in sandstorms and subject to other hardships in the desert region, Barcelóundertook a collaborative work designed to express these harsh natural conditions by painting on termite-gnawed paper. Since making his debut at the documenta exhibition in 1982, Barcelóhas steadily enhanced his international reputation. Though he originally set out to be a painter, Barcelóbrims with an astonishing amount of energy. He is ceaselessly involved in a succession of projects, and works in a wide range of genres, including not only painting on canvas but also creating watercolors, sculptures, ceramics, prints, books of illustrations, performances, and public art works, such as huge ceramic-paneled murals and large ceiling paintings. In recent years, Barcelós activities have come to be reminiscent of other Spanish masters like Picasso and Miró and at this point, he even seems to have transcended them.

Whether it is the sea around his hometown, an African desert, an Italian volcano, or the Himalayan mountains, which he recently visited, Barcelóremains endlessly curious about the nature that rises up from the depths of his body. Underlying his work is a sympathy for the material world, which he experiences with his entire being. From water, the fire of the kiln, and the earth to fish, animals, fruits and vegetables, and human beings, Barcelóhas a deep interest in every form of matter that makes up the world. As he has said, “It is the material that evokes an image.” The ideas that emerge from Barcelós materials resonate with his interest in the physical world. His work is guided and created by matter.

Enrique Juncosa, who served as commissioner for this event, has referred to the exhibition as “on the waters of a mirror.” He has also called Barcelós attempts to interpret the world unique methods of “reconstructing the constellations at will.” In other words, the imaginative creations of this artist with the ability to dive deep below the water are quietly projected on its surface, prompting a sensory response. Equipped with you own mirror, you are invited to savor the protean interpretations of the world that emerge from an alchemy between Barcelós subjects and the materials that stoke his passion. As the organizers of this exhibition, it is a great honor for us to expose you to this rare artist’s passionate energy.

Organized by The National Museum of Art, Osaka, The Yomiuri Shimbun

View of Miquel Barceló, The National Museum of Art, Osaka, 2021. 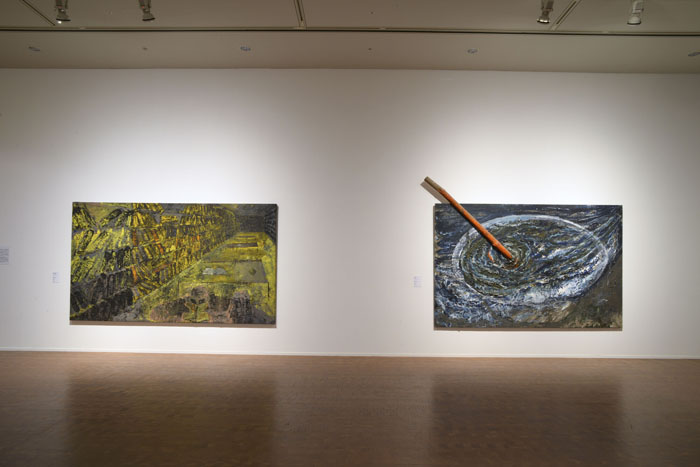