The Espace Louis Vuitton München is pleased to present EMISSARY FORKS featuring THOUSAND ISLANDS, the first solo exhibition in an institution in Germany by American artist Ian Cheng. It commemorates Cheng’s progressive practice in new digital art and honours his receipt of the 2017 “Award for the Filmic Oeuvre," presented by Louis Vuitton in association with KINO DER KUNST. Conceived and produced under the artistic direction of the Fondation Louis Vuitton, the exhibition showcases key works by Cheng in the framework of the Fondation’s "Hors-les-Murs" program, destined to introduce previously unseen artworks from its permanent collection to audiences of the Espaces culturels Louis Vuitton in Munich, Venice, Beijing, and Tokyo.

Cheng is an artist dissolving the boundaries between art and artificial intelligence. Drawing on the principles of video game design, cognitive science and improvisation, he develops "live simulations," living virtual ecosystems that begin with basic programmed properties, but are left to self-evolve without authorial intent or end. His simulations model the dynamics of often imaginative organisms and objects, but do so with the unforgiving causality found in nature itself. The artist describes his simulations as a form of "neurological gym": a format to exercise the feelings of confusion, anxiety and cognitive dissonance that accompany the perpetual state of change, a defining characteristic of our times.

The lower Espace gallery showcases two recent works, Emissary Forks at Perfection (2015) and Emissary Forks for You (2016). The former, displayed as a panoramic projection, simulates a fertile Darwinian playground managed by an artificial intelligence who is conducting a post-mortem analysis on 21st century humankind. The latter, an augmented-reality simulation for the Google Tango tablet, allows visitors to physically follow and interact with Shiba Emissary, a canine super-pet, through the Espace gallery and the neighbouring Maison Louis Vuitton. On the upper gallery level, Thousand Islands Thousand Laws (2013), presented on a room-size LED screen, features a video-game gunman, a flock of herons, and an island of plants that endlessly mix and mutate.

Ian Cheng is the recipient of the 2017 “Award for the Filmic Oeuvre," the third edition of the prize dedicated to an outstanding contemporary artist working at the intersection of visual arts and moving image. It is awarded by Louis Vuitton in the framework of KINO DER KUNST, Munich’s biennial festival of contemporary art and film, which in 2017 is based on the theme Fiction & Reality. The jury of this year’s award comprises: Jean-Paul Claverie (Advisor to the Chairman, Fondation Louis Vuitton), Ingvild Goetz (Founder, Goetz Collection), Hans Ulrich Obrist (Artistic Director, Serpentine Galleries), Suzanne Pagé (Artistic Director, Fondation Louis Vuitton), and Heinz-Peter Schwerfel (Artistic Director, KINO DER KUNST). Cheng’s solo show is in recognition of this partnership and his work’s recent accession to the permanent collection of the Fondation Louis Vuitton. Previous recipients of the award include Cory Arcangel (2015) and Wael Shawky (2013). 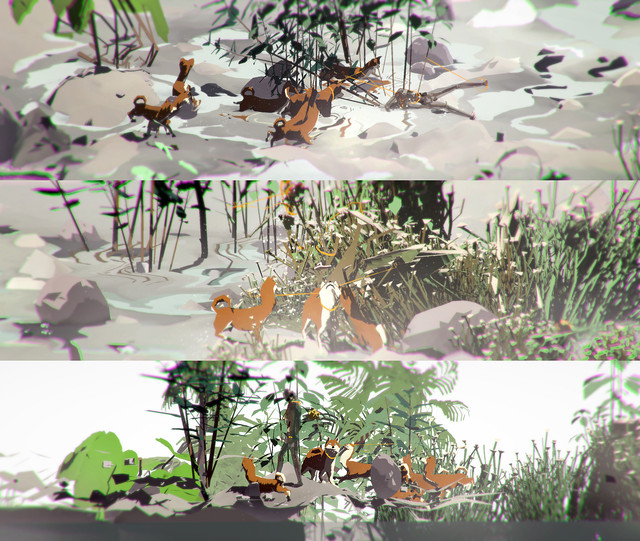