In the video installation The Colony, the Vietnamese American artist Dinh Q. Lê (Hà Tiên, 1968) shows us the Chincha Islands off the coast of Peru from various perspectives. Whereas Lê’s previous work focuses primarily on the Vietnam War, The Colony encompasses a broader web of references to the history of colonialism and imperialism.

The Chincha Islands are home to large colonies of seabirds, which have covered the terrain in mountains of faeces, known as guano. Valued as a fertiliser, this commodity led to a battle over the islands in the 19th century. British merchants used Chinese workers to harvest the guano, while Spain and Peru fought for dominance of the islands. In 1856, the United States introduced the de Guano Islands Act, empowering itself to take charge of uninhabited islands anywhere in the world. With the development of artificial fertiliser at the beginning of the 20th century, the geopolitical conflict over guano came to an end.

Although the islands are no longer inhabited, the guano harvesting continues. We see empty buildings in the desolate landscape, in which the workers carry out the heavy work by hand. In The Colony, Lê explores the greed, absurdity and human misery associated with imperialism, both in the past and in the present. 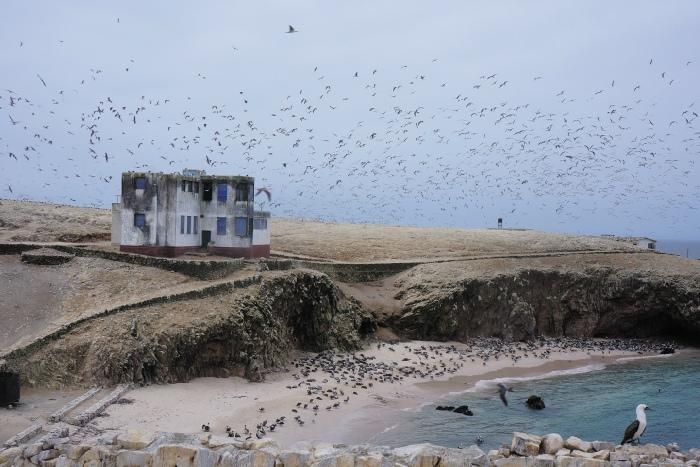