“I want a dyke for president.” It is the first sentence of the exhibition and the opening of the 1992 Poem by Zoë Leonard called "I want a President." Although written more than two decades ago by a feminist activist poet in the USA, it has lost no relevance either to the US or to Ukraine.

The poem provokes considerations toward recent global elections that shifted balances of power and sharply points towards the upcoming presidential election for Ukraine on March 31, 2019 as well as the Parliamentary elections in Ukraine on October 27, 2019. This provocation is present, future and past.

Democracy Anew? exhibition departs from a double question: “Do we need to rethink democracy? How to adjust or adapt this system to survive the challenges it faces today?” or “Do we need a new model? Is democracy losing? Is the representative power model is no longer functional and up to the task?” Throughout the exhibition, we do not offer a linear view to these questions we pose but rather suggest a complicated framework of thoughts, risks and dreams that define or threaten democracies as we know them today.

The first floor offers a historical and conceptual framework for the exhibition. The works of Luc Tuymans, Zoë Leonard, Allora & Caldzadilla and Rachel Whiteread offer reflections on the model of representative democracy: its failures and imperfections but equally at its capacity to inspire hope and brotherhood. Three robot-drawings (all 2018) by Goshka Macuga are juxtaposed to this. They are a playful gesture alluding to the finiteness of human dominance to interpret history or predict the future in favor of possible artificial intelligence.

Throughout the exhibition, one of the major challenges democracies face today keeps coming back: “How to protect democracy as an open society?” Especially the 2008 work Don’t Cross the Bridge Before you Get to the River by Francis Alÿs tackled this challenge head on. Today’s political choices to close borders, separate children from their families when trying to immigrate or keep people afloat in mid-sea threaten the fundamental openness of our societies and therefore democracy itself.

It touches upon the fundamental principle of a democracy to protect and emancipate the minority. This is a historical struggle of power represented in the works of Martine Tayou, who looks at this from an African point of view, and in the work of Sondra Perry dealing with the African-American struggle in the US.

Many of those risks and challenges become more complicated to handle in a world where populism and authoritarian regimes seem attractive and successful. An idea projected a newly produced painting by Takashi Murakami or in the works of Maurizio Cattelan.

But throughout, art is one of many forms that offer resistance. Art takes systematically the position of the minority and provokes the status quo. Like the work Still river (2016) by Olafur Eliasson, its provocation is both aimed at itself, generating a polyphony of forms, and aimed at the standards to which a society and its individuals judge their way of life, their future and surroundings.

Contemporary art, just like a good functioning democracy, creates “a sense of possibilities” (Luhmann quote / in The Art of Democracy, Pascal Gielen, pg 7). Looking forward the presidential elections in Ukraine, it’s this sense of possibilities we must cherish. To say it with a phrase Zoë Leonard poem: “… I want a candidate who isn’t the lesser of two evils…” 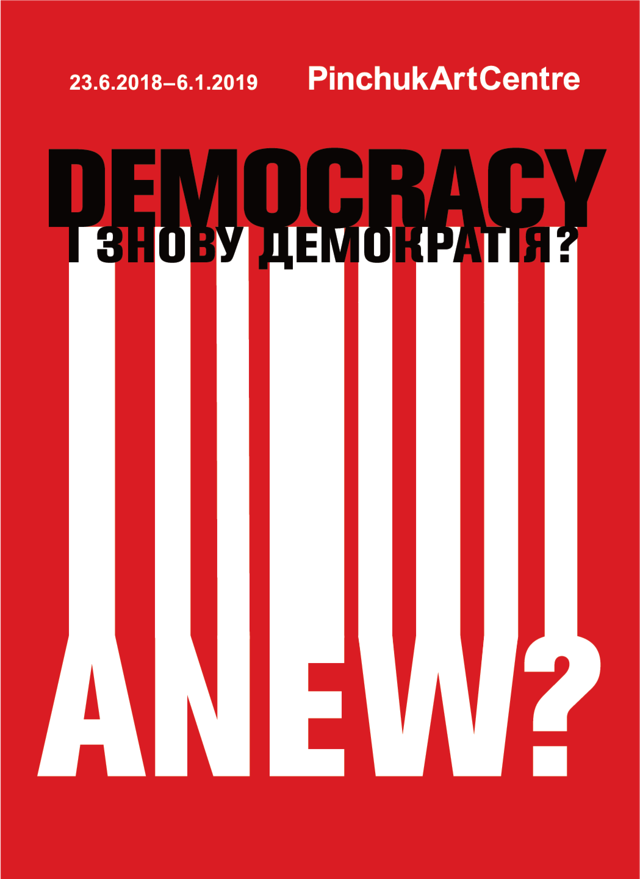