Dave Hullfish Bailey’s practice of exploratory geography combines sculpture, photography, text, drawings, and other elements. His assemblages bring together a diverse array of materials, from a livestock feeder to printer supplies, car bumpers, maps and roofing panels, that come together in a system of linguistic and functional relations. Bailey’s exhibitions, perhaps not unlike Smithson’s, explore the outdoors and indoors dialectic, and are rooted in engaged and extended research on specific geographic locations. His works consider the natural and cultural aspects of the sites, and connect them through highly relational models of space, place and objects. 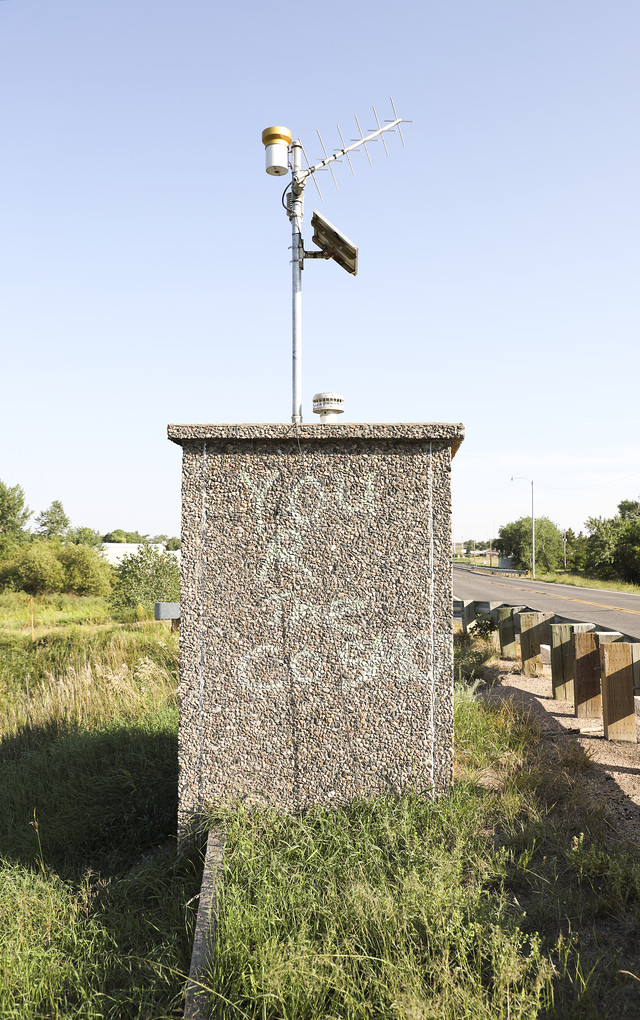 Dave Hullfish Bailey, East shoulder of US 385/northern braids of the South Platte, August 22, 2017. Courtesy of the artist.

At REDCAT Bailey presents a selection of works exploring sites in the inland west of the United States, each related to an alternative educational model. These sites include the Purgatoire River drainage, home of Drop City, a short-lived experimental community founded in 1965 in southern Colorado; the volunteer-run library in Slab City, an ad hoc autonomous zone for snowbirds and a small year-round population located on an abandoned military base in Imperial County, California; and the Nebraska Sandhills from the zone of totality of the August 21, 2017 eclipse. These distant sites are linked via a network of connectors (such as waterways and wind patterns, transit corridors and infrastructural systems, historical migration pathways, etc.) as well as speculative conjunctions rooted in language and diagrams.

In the U.S. interior, especially west of the 100th meridian west, Cartesian models of space that established its legal division and colonizing social and economic models, are in particular tension with the biological and geological dynamics that organize and determine the carrying capacity of the land itself. These models, in particular Jefferson’s agrarian/yeoman democracy and grid system, overrun the indigenous knowledge systems that were in synch with these dynamics.

In the wake of historical and ecological failures created by this disconnect, alternative models of habitation and utilization have taken root—industries of resource extraction as well as utopian experiments seeking distance from normalized, and normalizing society. Bailey explores these complex ecologies of communal organization and ways of living together. His projects overlay competing approaches to social and political organization, labor and leisure, anarchism and collectivism, discipline and control as means to explore geographic and cultural imaginaries and the realities they create.

Bailey’s practice occupies a space in the seams between the landscape and the symbolic tools we use think about it. Against political tendencies toward abstraction or instrumentalization, Bailey’s works unfold as moments of a concretized thought process in which what might be remains rooted in the complexities of what already is.

Hardscrabble is organized by Sohrab Mohebbi.