In his practice, Carlos Garaicoa (born in Havana in 1967) investigates how the city and its architecture reflect and influence society. Today he lives in Madrid, but he keeps returning to his home town, Havana in Cuba, where he is still active and maintains a studio.

Carlos Garaicoa… a borderless reality, like gardens of the eternal…

Havana’s unfinished and abandoned construction projects, and the lost dreams they represent, is a starting point for his meditations on how all utopias fail. In Havana’s decayed buildings from the colonial era and the early 20th century coexist with the many truncated projects of the Cuban Revolution. After the fall of the Berlin Wall in 1989, Cuba became isolated and was hit by serious economic crisis, which made most construction work impossible. To Garaicoa, such urban ruins symbolised setbacks for the regime and the death of revolutionary utopia. Beyond the Cuban context his practice visualises the dark side of all utopias and constitute a critique of Modernism and the ideological societal projects of the 20th century.

Garaicoa’s first artistic project consisted of anonymous interventions in the city, commenting and questioning the changes it was undergoing. He gradually shifted to using photography and drawing, and soon also sculpture, video and architecture, for his still ongoing investigation of the city as a political and economic landscape.

Much like the professionals who shape our public space, Garaicoa places sketching and modelling at the core of his artistic practice. Carlos Garaicoa’s work reminds us of how significant our surroundings, and especially architecture and urban planning, are for his still ongoing investigation of the city as a political and economic landscape.

The exhibition consists of two parts and is a collaboration between Skissernas Museum and Lunds konsthall. This is the first significant presentation of Carlos Garaicoa's work in Sweden. 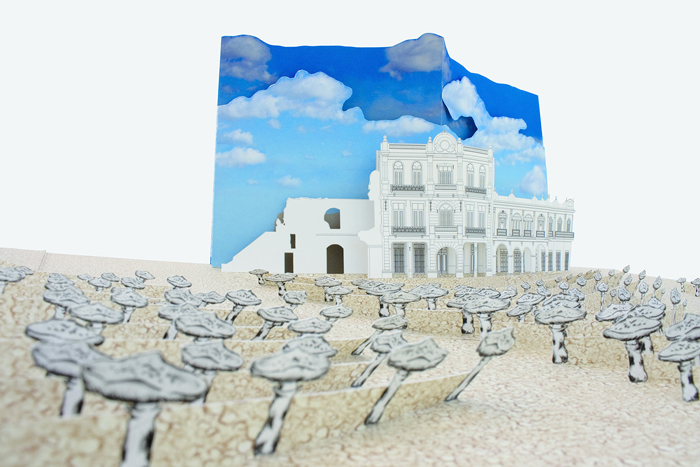