From November 22, 2018 to March 3, 2019, FACT, Liverpool premieres Broken Symmetries, a new, international exhibition of artworks exploring the links between art and science, and how both can help to reveal hidden elements of our world. 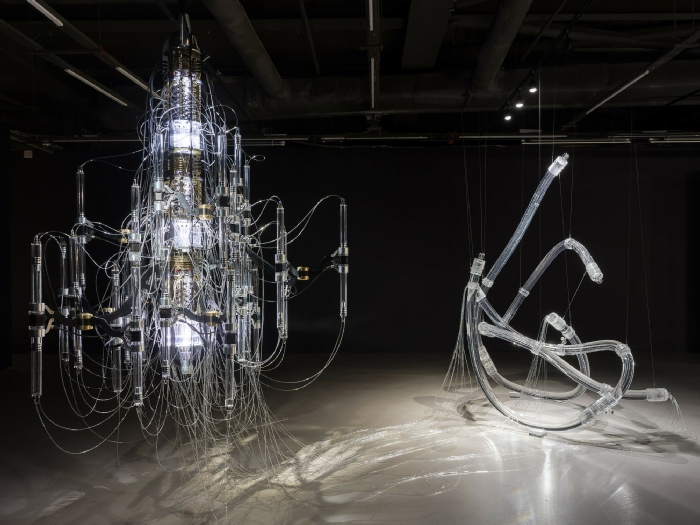 Broken Symmetries is comprised of artworks which rethink scientific facts—challenging our notions of reality and how we arrive at something as "certain." These works question how much we really know about the world around us, and how we may begin to discover new aspects by taking a different perspective.

In recent years, CERN in Geneva—the world’s largest laboratory of fundamental scientific research—has fostered novel models of collaboration between arts and science within the context of the lab. The Collide International Residency award has been one of the core programmes of Arts at CERN since 2011, and a collaboration with FACT since 2016. Within this programme, artists are invited to spend time working alongside particle physicists and engineers: these encounters spawn creative collisions that enrich and diversify scientific thinking, whilst simultaneously providing endless resources for artistic practice. Broken Symmetries brings together just some of the works developed during the last three years of this programme.

Co-produced by CCCB, Barcelona; le lieu unique, Nantes and iMAL, Brussels, the exhibition will tour to each of these venues during 2019-2020.

Lesley Taker, Exhibitions Manager at FACT, said: “Now more than ever, it is of increasing importance that we understand the world around us is not as it seems, and how much of our existence relies on changing narratives. We are thrilled to partner on such a collaborative project which has seen artists working with science to create works in which some of the most urgent questions of our time collide with the forefront of scientific research.”

Works in the exhibition include Yunchul Kim’s Cascade, which explores matter by capturing the pattern of muons: i.e. electrically charged subatomic particles. By highlighting the patterns of movements and reactions from invisible particle collisions in a physical reality, Kim explores fluidity as a means of investigating materials and the particular condition of matter. The mysteriously beautiful objects not only visualize a kinetic experiment, but also create a living organism that interacts with its environment, triggered by the detection of these invisible and fundamental particles.

hrm199’s work one1one fictionalises a situation in the year 4250, where spoken communication is rendered archaic and defunct due to supernatural, mystical and spiritual phenomena. The work examines language as a human technology: drawing on incantation, ritual, and the relationship between written and spoken word. Through this series of sensorial stimuli, hrm199 aim to scrutinise the limitations of how human language can make sense of things, particularly the contradictions of meaning which can occur when it is used to describe fundamental science.

Móica Bello, Curator and Head of Arts at CERN, said: “The process of learning through discovery in arts and science make them well-suited partners in interdisciplinary work. The art displayed in this exhibition is a result of three years of intense dialogue between the Collide International artists-in-residence and physicists at CERN. It illustrates how scientists and artists can work together to create a culture that explores questions about the universe we live in."