Approximately 50 years ago, roughly coinciding with the rise of the modern environmental movement, the subject of trees emerged as a motif in works by some of the most adventurous and influential artists of the time. In the years since, this engagement with trees has grown into a rich vein of contemporary art to which artists working in diverse media and different parts of the world have contributed. Drawing on the visually arresting character of trees, these artists invite us to reimagine our relationships with trees and forests as both symbols and living organisms that have helped to shape human civilisation and continue to play an indispensable role in our lives and imaginations.

International archives 1st half of 2020

Among the Trees brings together works by 38 artists that re-invent traditional genres and develop new ways of representing their subject in order to shift our conventional perceptions and understanding. Divided into three main sections, it opens with artworks that call attention to trees as interconnected structures, chiming with recent scientific discoveries about the “wood wide web”—the network of underground roots, fungi and bacteria that connects forest organisms. A number of artworks in this section—including Eija-Liisa Ahtila’s cinematic portrait of a 30-metre-high spruce—celebrate the soaring scale of trees, and challenge our anthropomorphic perspective of the world by turning it, almost literally, on its head.

A second strand of this exhibition considers the ways in which trees unsettle the distinction between nature and culture, the man-made and the organic. Instead of depicting trees as belonging to a separate world of “nature,” the artworks in this section—which include Jeff Wall’s large-scale photograph of Bedouin workers asleep next to an olive orchard in the Negev desert, and Steve McQueen’s photograph of an unmarked tree growing near New Orleans, previously used as a gallows—underscore how entwined their existence is with our own.

In the final section of Among the Trees, artists explore how trees disrupt and enrich our conception of time. Ugo Rondinone’s monumental sculpture cold moon (2011) cast from a 2,000-year-old olive tree, and Rachel Sussman’s photograph of a 9,550-year-old spruce, serve as a reminder of the relative shortness of human life compared to these long-lived organisms; while artworks including Roxy Paine’s theatrical diorama Desolation Row (2016), which depicts a still-smouldering forest floor, draw attention to the vulnerability and increasing precarity of trees and forests in our Anthropocene era. 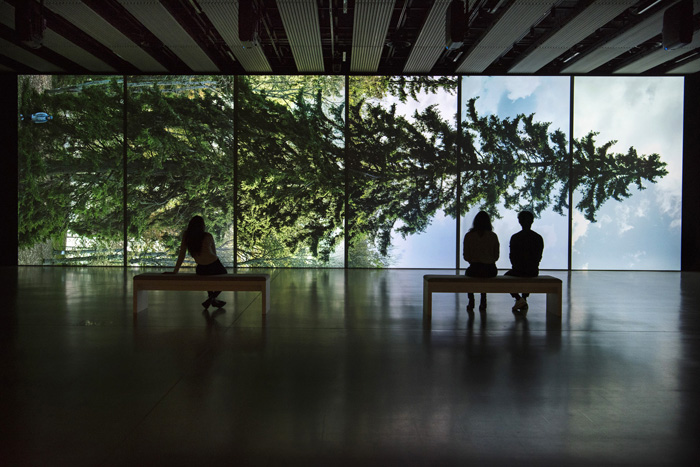