If a crime continues to occur regardless of the enormous evidence available, then is the crime invisible or the evidence invisible or are both visible but not seen? –Amar Kanwar

The Sovereign Forest initiates a creative response to our understanding of crime, politics, human rights and ecology. The validity of poetry as evidence in a trial, the discourse on seeing, on compassion, justice and the determination of the self, all come together as a constellation of films, texts, books, photographs, objects, seeds and processes.

Recognised for his filmic works, and installations that interrogate the politics of power, violence and justice, The Sovereign Forest is a long-term commitment of Amar Kanwar in collaboration with media activist Sudhir Pattnaik, and designer and filmmaker Sherna Dastur. For over a decade, Kanwar has been filming the industrial interventions that have reshaped and permanently destroyed parts of Odisha's landscape—a battleground on issues of development and displacement since the 1990s. The resulting conflicts between local communities, the government, and corporations over the use of agricultural lands, forests, rivers, and minerals, have led to an ongoing regime of violence that is often unpredictable and invisible.

The forcible displacement of indigenous (tribal) communities and peasants has been a brutal cycle of life in Odisha since the 1950s. In the past fifteen years, several mountain ranges, wildernesses, and agricultural lands were sold or leased to mining cartels and other corporations for commercial use. A new economic regime allowed for the formal removal of legal and bureaucratic restrictions. The process of land acquisition became easier, and exacerbated the corrupt practices indulged in by political parties, government departments and the judiciary. A series of local resistances by peasants, fisher-folk and indigenous communities emerged. Powered by autonomous local leaderships, primarily non-violent, stubbornly resilient, occasionally supported by urban activists, they have shared their experience to enable a local discourse to emerge on development, industrialization and rehabilitation. This resistance has faced police repression or violence by local mafias hired by politicians or corporations. Examples of this include the movements resisting the bauxite and aluminium companies in Kashipur; against land acquisition by the Korean steel company POSCO and the industrial group TATA in Kalinga Nagar.

Situated within The Sovereign Forest is The Scene of Crime (2011), an experience of a landscape just prior to erasure. Almost every image in this film lies within specific territories that are proposed industrial sites and are in the process of being acquired by government and corporations in Odisha. The Counting Sisters and Other Stories (2011), The Prediction (1991–2012) and The Constitution (2012) are three large handmade books each with their own films projected on its pages. Containing stories written by Kanwar and pieces of "evidence" such as a fishing net, a cloth garment, rice seeds, a betel leaf, and newspaper embedded inside the paper, visitors are encouraged to turn the pages and read these stories.

The Sovereign Forest captures the magnitude of scams and hardship of the affected population and asks critical questions: how to understand crime and the conflict around us? Who defines evidence? Is an illusion more real than a fact? Can "poetry" be used as "evidence" in trial? How do we see, know, understand, and remember disappearances? How to look again?

Artist and filmmaker Amar Kanwar (b. 1964) was born and works in New Delhi, India. His works have been presented at a number of international film festivals, art biennials and museums all over the world. Among others, this year was his fourth consecutive participation at documenta in Kassel, Germany.

Amar Kanwar, The Scene of Crime (installation view from The Sovereign Forest). Courtesy of the artist and Marian Goodman Gallery. Photo: Henrik Stromberg. 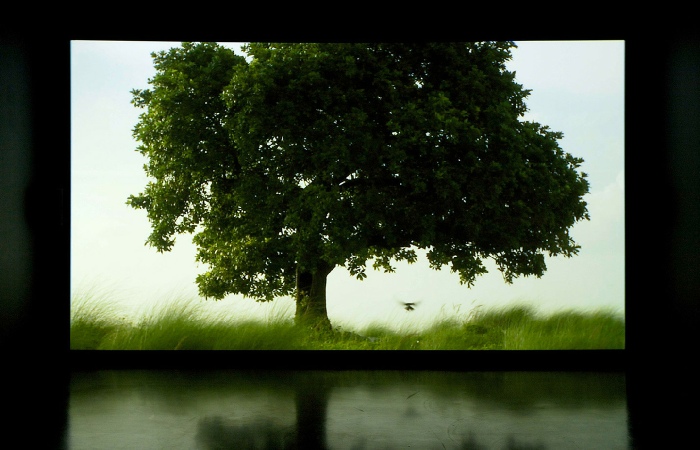